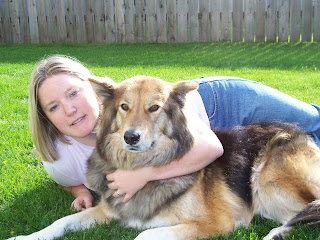 Sable, 12 or 13, was put down at the vet tonight. She died, like Liquid, from a whole bunch of things: cancer, terrible arthritis, and the beginnings of liver disease. She'd also been almost completely blind for about a year. It became more and more painful to see her limp around the house and develop a very throaty pant (which is indicitive of pain). I can't help but wonder if she knew the end was coming--she wasn't eating as much these last few days, and stayed outside much longer than usual, just laying in her dirt patch. After the deed was done, the vet made an impression of her front paw in clay, which is nice.
For my wife, Sable was the best dog in the world, and she was very close to Sable. Sable herself was very independant and didn't necessarily see us as her owners as much as people she lived with. The second treats were made available next door, she probably would have easily lived with our neighbors without skipping a beat. But she loved walks and head-scratches, and we'll both miss her terribly.
Sable is survived by her roommate, Ozzie, and the humans who loved her very much.
Posted by Zach at 9:20 PM

I am so sorry to hear this Zack. I know exactly what you are going through as I recently had to put my dog, Toby, down about a month ago. But what matters is that they are not in pain now and that they had wonderful long lives and were loved.

Lunatiq Coquette said...
This comment has been removed by the author.
2:28 AM

"I'm sorry" always seems so inadequate, particularly when it's expressed for someone you only know from perusing their posts and who, in turn, doesn't know you at all. But I am. I always have to reach over and lay a hand on my pets when I read something like this.

Re: The discussion of the afterlife from the post about Liquid (it's really been a bad couple of days up there, hasn't it :/) - When I'm contemplating what I believe (and often these days, whether or not I do in fact still believe at all, though what I hold/held is fairly nebulous and hasn't been tied to the 'big' religions in years), what always gets to me isn't what will happen to me (well, not completely) or whether or not I'll see my family and friends again, but whether or not I'll see my animals again.

She was a beautiful dog (and Liquid looked like a great little gecko - I was really hoping he'd pull through for you).

The hardest thing about keeping pets is that you have to make the decision as to when their life needs to end.

The choice you and your wife made was both difficult and noble. My best wishes to both of you and to the memories of Sable and Liquid.

I truly wish that I posessed enough eloquence to describe my most heartfelt condolences for this loss, Zach. Hold tight to your memories of these non-human friends.

I'm so sorry Zach. I know how hard it is to make that decision. My thoughts are with you and your wife.