An American Paleoartist in London: Day 1 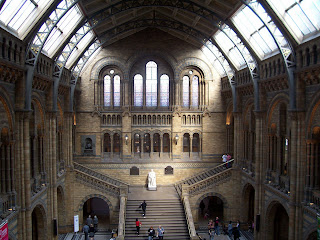 Well, technically, yesterday was my first day, but most of it was spent on two different planes. Highlights from the trip:
1) British Airways treats you like a person, not an inconvenience.
2) Our row's flight attendant was kind of a bitch. She didn't ask "tea or coffee?" as much as bark it, loudly, demanding a rapid answer.
3) Jesus H. Christ, the customs line was freaking long. And they only ask like two questions.
3) Dot2Dot is a godsend--I left my DSi on the shuttle, realized it hours later, called them up, and they had it to me the next morning.

Here are some things I've learned about London more generally:
1) Years of watching "Are You Being Served?" and "Keeping Up Appearances" does NOT prepare you for the chatty young British woman trying to get you into the Ripley's Believe It or Not "museum" downtown. She spoke so fast, and with such a heavy Cockney accent, that I can't imagine her fellow Britons could understand her, much less an American. Also, 22 pounds per person? I don't freaking think so.
2) The British are unfamiliar with water fountains, water pressure, or temperate showers. I spent most of today completely parched because my only hydration options were in bottles that cost 2 pounds or more. As for water pressure, there is none in our apartment: water doesn't so much rush from the shower head as fall limply from it. It's like showering in a mobile home. Despite this, the shower also only has two temperature settings: Absolute Zero and The Surface of the Sun. To find an acceptable medium takes much longer than you can possibly imagine.
3) Do not plug your American electronic appliance into a British outlet without something called a "power converter" except for the outlet is in the bathroom that says "shavers only."
4) Something about the air here is making me really bloody productive, cough-wise. I don't know if this is encouraging or worrying. Seriously, I haven't gotten this much sputum out at once in years.

On to today. We spent the morning in the London Museum of Natural History. The highlight of the trip was meeting fellow paleoblogger Mo Hassen, who showed us the library and some exhibits we would have otherwise missed. He's a real nice guy, and very knowledgable about the museum's specimens. I suppose he should--he does work there, after all, but it was great meeting him. I realize now that I should've gotten a picture with him, although we'll see each other at SVP, too. The museum itself was a bit of a mixed bag. You'd think that one of the world's premier natural history museums would keep up with the literature, but it hasn't in any meaningful way. The dinosaur hall is disappointing: poorly-lit skeletons hang from the ceilings, forcing one to use the battery-draining flash to capture them on digital film. A whopping three European dinosaurs were on display: Hypsilophodon, Baryonoyx, and Iguanadon. Well, Dacentrurus was there too, but out of place, in the marine reptile hall. Anyway, there were more American dinosaurs than British ones. Where's Eotyrannus and Xenoposeidon? Give me Neovenator, not Camarasaurus! There was no discussion on dinobirds, no feathers on the (hideous) animatronic raptors, and no pterosaurs (in the hall). It's clear that the museum has made virtually no effort to remain current with paleontology for at least the last decade. I did like this fellow, though: 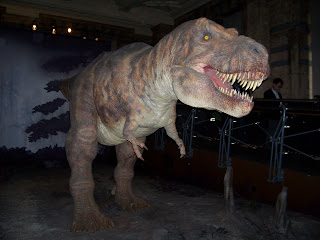 Next up: the mammal area! Lots of stuffed mammals, including several pangolins and even a golden mole. The best room in the place was the giant hall with stuffed and fossil mammals, including a life-size Baelenoptera musculus life model and skeleton, flanked by skeletons of a bowhead and gray whale. Behind them was a sperm whale, with a restored "melon." Plenty of interesting fossil beasties, including Arsinotherium and lots of extinct elephant skulls. Again, the paleontology is not current. Whales are explained as having mesonychid origins, and Deinotherium has a long trunk instead of a tapir-like nose. Maybe I'm asking too much, but is it really that horrible to want the London Museum of Natural History to stay current with its science?

Mo showed us the museum library, which is extensive and impressive. He also took us to the marine reptile hall, which is far and away the most enjoyable room in the place. Plenty of wonderful specimens of ichthyosaurs and a few mosasaurs and plesiosaurs for good measure. Mo explained that many of the specimens show the original names, but they have been placed in new genera. He also said that the famous fossil of Ichthyosaurus giving birth might not be giving birth. My favorite fossil was a beautiful, complete Eurhinosaurus. It's a much larger ichthyosaur than I thought!

After leaving, we wandered into the Science Museum, saw what it is, and promptly left. Don't get me wrong, technology is great, but the history of steam is not on my list of things to see. Also, we bought Oystercards and took the Underground everywhere. It's fantastic and much easier than I thought it would be, though the shuttles themselves are devilishly hot. After a nice long nap, we explored downtown in an effort to find the Virgin megastore, but never did. Instead, we fought our way through a living sea of people, eventually finding solice in a bookstore where I bought Darren Naish's new "Great Dinosaur Discoveries" book. It's a great read so far, though I'm only five pages in. Not technical by any means, but an interesting history of the science.

Tomorrow we may venture toward the Globe and the Tate Modern. In the coming days before Bristol, we may yet take a day trip out to Cambridge. Also, does anyone out there know the easiest method of getting to Down House?
Posted by Zach at 2:41 PM

Excellent review... glad you had a good time at the Museum. I agree with pretty much every point you made. We'll get a pic together at SVP, I'll make sure of it :)

Virgin Megastore is no more; Zavvi bought them a couple of years ago and went out of business last December, leaving nothing to replace them. HMVs are everywhere though, there's one on Oxford Street and one in Leicester Square near the Ripley's believe it or not.

Definitely go to Cambridge, as I suggested earlier: the Zoology Museum and Sedgwick Museum of Earth Sciences are both excellent, plus there are loads of bookshops in town. As for Down House, probably your only way of getting there without a car is train from Victoria Station to Bromley South, and then a bus (the 146). I've never been, let alone on public transport, so I'm not sure how you'll find that.

I'm jealous -- I won't make it to BMNH this time unfortunately, and I really need to see their marine reptile hall....

Eurhinosaurus is one of the few really interesting post-Triassic ichthyosaurs in my book. Pity there aren't more decent reconstructions of it...I suppose I shouldn't promise I would blog about it though.

Oh yeah, and see you in Bristol!