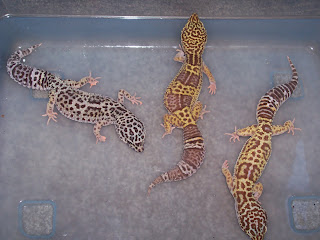 Liquid Gecko (right), four, died last week of systemic infections that may have included cancer. Both eyes were horribly infected with green pus and a tumor-like growth appeared behind his left eye. Minor sugery to the area revealed nothing inside but white tissue. He may have also been compacted, but it's hard to tell. I put the poor lizard down by refrigerating him for a half hour, then moving him up to the freezer. He hadn't eaten in months and was visibly declining. I suspect he was days from death when I "helped him along," but I didn't want him to suffer any more. He is survived by his brother, Solid (center) and his cousin, Mr. Fat (left).

His corpse was buried in the backyard and marked with a paint stiring stick. Hopefully his body will have skeletized by next summer. The one good thing to come out of the saddness is that I'm no longer losing sleep worrying about the little guy.

In times like this, I find myself selfishly hoping Liquid is going to some abstract "better place." That Big Terrerium in the Sky, as it were. It's useless to speculate on some higher plane, however. I suspect that humanity creates afterlife myths to comfort the living and remember the dead, but the reality may very well be that we become the very dirt we were born from. Those with unshakable faith know that white clouds and angel wings await them beyond death, but I have no such luxury. Death is hard for me, not only because I will miss the individual who I've lost, but because I worry about what it means for me. I cannot, and will not, entertain ideas of an afterlife of which there is no physical evidence. I may as well waste my time hoping dragons exist. Maybe they do, but until one is found, I'm going to worry about more worthwhile endeavors.

The bad news? We may...probably will...lose Sable tomorrow, too.
Posted by Zach at 6:47 PM

I'm sorry for your loss, Zach. Take comfort in what you can.