An American Paleoartist in London: Day 2 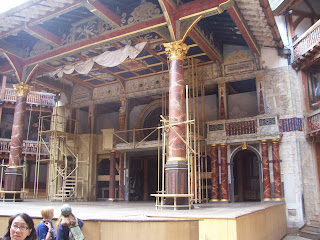 Today we woke up fairly early and headed out in search of the Globe Theater. This turned out to be much more difficult than we'd thought, as the Jubilee Line was closed. So we took a different route and ended up very far from the Globe. Our map guide is impressively detailed, which actually makes navigation more difficult. After probably a half hour or more of wandering aimlessly, we discovered the Globe and took a tour. The tour was great, and we learned a lot about what the theater was like "in the time of Shakespeare." I was most interested to learn that the best seat in the house was above the theater itself, and was reserved for rich men who would spent the performance showing their legs to the ladies. And because the Globe didn't use scenery, actors were constantly narrating the stage direction ("I'm hiding behind this tree!" "We're fighting!").

We then headed to the Tate Modern, which, despite its impressive size, isn't all that great. Considering the enormous empty spaces within, a lot more art could fit in there. Only the first floor contained pieces I genuinely liked. The rest was modern wierd sculptures and a bunch of Warhols and Warhol imitators. Gina and I were both underwhelmed, and went across the Millenium Bridge to see St. Paul's Cathedral. 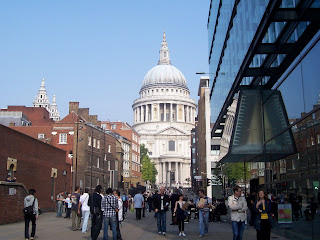 On the way, we stopped at a place called "Pizza Express" for lunch. Back in the States, when a place has the word "express" in the title, it means that it's essentially a hole-in-the-wall where you get cheap, but often good, food. This was none of those things. We sat at tables with wine glasses and were served by a woman in a suit. The pizzas weren't so much pizzas as deconstructions of pizzas, paring down the ingrediants to their most basic forms. Gina's was shaped like a doughnut. They were sparsely decorated with a minimal assortment of ingrediants, and the crust was thin enough that without the cloaking power of tomato sauce, the plate would have been visible through the dough. We also got dessert: something called "gelato," which is not some kind of gelatin, but instead the common ancestor between soft-serve and normal ice cream. It was very good. The whole meal, including drinks and tip, cost 30 pounds, which seems excessive considering the strange pizza.

We crossed the street to St. Paul's only to be confronted by a horrible entry fee. Maybe if the American dollar were not so weak, we would pony up the dough. Am I the only one who thinks it's odd that a house of God would charge people to enter? Oh wait, it's a Catholic church!

Returning to the hotel was a goddamn nightmare. The sun wreaked its firey judgement from on high, roasting me. Picadilly Circus may in fact be Hell on Earth on a Saturday. If and when I am cast into The Pit, it's going to look something like this. Unbreaking waves of people swarm the sidewalks, going all different directions at once. Sometimes you'll make a crosswalk ahead of the tide and for a brief moment you can breathe, but the billowing crowd immediately overtakes you. Add to this the heat, and the exhaustion from walking all morning, and Gina and I both became quite cranky. The longer I'm in London, the more I notice what it's missing. I hold by my earlier statement that no liquid in this town is free, and I took the time to look today. You can also only buy two brands of pop here: Coke and Pepsi. Derivative brands like 7-Up or Fanta or, yes, Mt. Dew are entirely absent here. Actually, that's not correct: Fanta is present, but it's a bizarre orange juice, not the sweet Sunkist-like soda pop we find in the States. I also haven't found a proper grocery store. We've been procuring out meager food and drinks from a Tesco two doors down, but I have yet to see a Safeway or Fred Meyer equivalent. There is also no AC, and its absence is heavily felt right now.

Not quite sure what tomorrow holds yet. Perhaps the British Museum and the Tower of London.
Posted by Zach at 6:51 AM

Anglican, to be massively pedantic (Episcopalian is the name given to the Anglican churches in America).

Oh bless, Zach, you're really having a time of it! As the others have said, St Paul's Cathedral is Anglican, not Catholic (albeit very ornate, so perhaps easily confused for a Catholic cathedral) - and if you were planning on worshipping it would be free (I know, I know).

Fanta is carbonated over here - I have no idea what you've found instead! Instead of 7-Up try Sprite, which should be as available as Coke and Pepsi. And if you try Tango that is citrus and fizzy (there are orange, lemon, blackcurrant, etc). If you're adventurous try Lilt and/or Irn Bru and/or ginger beer (it's non-alcoholic). If you haven't found Dr Pepper yet though, you haven't looked hard enough.

As far as large supermarkets, you're suffering from being in London. A lot of the supermarkets in inner London are smaller stores like the Tesco you've been to. However, Tesco is the largest supermarket chain, and we do have some Tesco stores approaching Walmart sizes. Look out for Sainsbury, Asda (which is part of the Walmart group) and Morrisons. There aren't any Safeways around anymore (Morrisons took them all over).

I'm bringing my car to Bristol, so if you need to stock up on stuff when you're there let me know and we can find a big supermarket for you.

As for Piccadilly Circus, I totally and utterly concur. I blame the tourists... ;-)

Piccadilly is indeed vile. The Globe is awkward to find at times, I agree. It's weird. On the other side of the river, its right there and then you cross over and *poof* it vanishes. It's a good place to visit though.