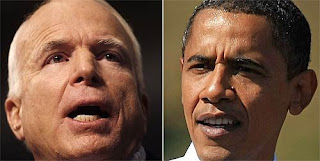 Did you get out there and vote today, America? Because you really should. I did this morning, and it felt good. Now, aside from two weeks, maybe a month of post-election/campaign commentary, I think we're in the clear. "Talk of the Nation" and "All Things Considered" (two of my favorite NPR shows) will start discussing other things, and life will go back to normal.
I voted for Obama/Biden. Critical thought and rationality allowed me to do this. I'm not sure what percentage of the American people will follow my lead, however, as we tend to be skiddish, easily frightened, and deathly afraid of change. A lot of McCain's zinger labels stuck to Obama. I'm sure that right now, people are voting for McCain because they think Obama is a terrorist (thanks, Palin) or a socialist (do you know what Socialism IS?). Also, there's the whole McCain/Palin "anti-science" thing. That rubbed me the wrong way since Day 1. Palin doesn't understand why scientists do genetic research on flies (would she prefer we do our genetic research on people?), and McCain's science opinions fall in line with our current president's (makes...me...angry).
But no matter who you're voting for, I'm not going to lose sleep over it. My enthusiasm for Obama is matched only by my cynicism regarding American's inability to vote for somebody other than the old white man. I won't be surprised either way tomorrow morning. But I'm just glad it's over...pretty much over.
Posted by Zach at 11:21 AM

I'm 90% sure that Obama's going to walk away with this. However, what to watch for are the following states and the Bradley effect (or whatever they call it in your area):

If the Bradley effect fails to materialize, then Obama wins. Palin ahs done more to smash the McCain campaign than Obama has...:(

Betcha Obama wins. There's a blood bath in the Republican party and the religious conservatives come out on top...temporarily. Palin becomes the 2012 GOP front runner. She gets an EPIC FAIL and the revolution in the GOP disposes of the Christian Conservatives. Then in 2016 we get a wide open field again since Biden's so old (he'll be 75 then...if you think the cracks about McCain's age are bad now...)

"Palin ahs done more to smash the McCain campaign than Obama has...:("

Truer words have never been spoken about this election.

"Palin becomes the 2012 GOP front runner. She gets an EPIC FAIL and the revolution in the GOP disposes of the Christian Conservatives."

An event I'd kill to sell tickets to. I want her to run. If this doesn't destroy her political career for good, maybe that will.

An event I'd kill to sell tickets to. I want her to run. If this doesn't destroy her political career for good, maybe that will.

As a Repugnant, ahem, Republican, I'd like to see the Fundie Bunch in general smashed.

Let me say that neither candidate is going to be friendly, if elected, to science. Obama voted against ITER. Something some of my coworkers had been working so damned hard to get the politicos to agree to and then...(fusion funding has been BAD for two, three decades now, btw). It's just a question of WHICH science they are bad for. McCain's idiotic line about genetics and bears in Montana gets my blood boiling like you won't believe, btw.

On top of it all though, there's two wars to pay for, the economic bailout package, AND the baby boomer retirement. This is going the savage the budget for anything else. The eldest Boomers will be 70 when Obama probably will leave office with the youngest being 50ish. Unless we get an economic miracle, that's gonna suck.

Didn't hear the bears in Montana comment. Care to divulge?

Out of the ones you mentioned

Now we're just waiting on the results for the other five....

I would really really really like to know what Obama meant by that comment of "spreading the wealth around." Because that worries me. A lot.

I would really really really like to know what Obama meant by that comment of "spreading the wealth around." Because that worries me. A lot.

^ Proof that scare tactics in a campaign can actually convince people.

That did little or nothing to alleviate my fears. Because I watched/heard him on video say "we need to spread the wealth around."

So could somebody explain to me what he could've meant by that?

By the way, I'm not going on the offensive or anything, I just seriously want to know what the fuck that meant.

I am neither Republican nor Democrat (undeclared fits best), mostly because I like to cherry pick the best of both for my own nefarious purposes.

I probably would have voted McCain had he picked Leiberman. Most of my Palin resentment comes from the fact that McCain picked someone who was green in every single sense of the term, playing maverick should should have been listening to her handlers (shutting up being always preferable to yapping off).

She came off as having the intellect of chewed gum and she made us (Alaskans) look--let's be frank--more than a little stupid as a result. That's what annoys me.

"Unless we get an economic miracle, that's gonna suck."

We could start making toys here again. (It worked for Europe and Japan, didn't it?)

Making toys is a great way to kickstart an economy, really. Maybe it could save one. It's not like we don't already have the technological base.


"By the way, I'm not going on the offensive or anything, I just seriously want to know what the fuck that meant."

Without proper context, it's going to be hard to say if he was speaking metaphorically or, as you fear, literally.

In any case, the Executive branch can do nothing without Congress, which holds the metaphorical purse strings of the nation.

To Will and lantaro: sorry for not including proper attribution, I'm BC this morning.

Marcus, he's not going to turn our nation into China or Cuba, which are both socialist states. I believe he meant that he's going to do what he's been saying all along--give tax breaks to the middle class while taxing the super-rich more than they've been paying under Bush. It's not so much "spreading the wealth around" as evening the playing field.

And frankly, we do need the government to step in and regulate the banks and Wall Street. We need to get back to baseline.

We need, need, NEED the government to start monitoring the banks again.