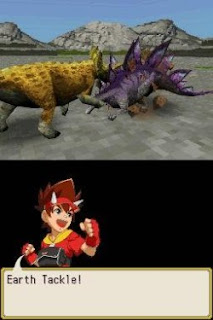 Damn you, Sega. Somehow, you knew that I obsessively "caught 'em all" in Pokemon Pearl last year, but that my chief complaint was that there weren't enough dinosaurs. Well, Sonic's pappy is rolling out a new DS cart in the coming months, Dinosaur King, which promises over 70 real-life prehistoric creatures which duke it out for world domination much like a Pokemon battle would work. I was able to briefly play the game at PAX, and I've got to say this: It's fucking awesome.

Why? Because the dinosaurs are scientifically accurate. Sure, the Tyrannosaurus breathes fire and the Triceratops does some sort of jumping flip dive, but the gross anatomy is strikingly well-done, and the 3D models are crisp and animate beautifully. When you're not fighting other dinosaurs, the game takes place on a 2D sprite-based backdrop, much like the Pokemon games. You have a trainer, a stash of dinosaurs ready to battle with, and items to use both on the field and in fights.

I don't think I could be a whole lot more excited about this, which reminds me: I need to get the PR guys at NWR to contact Sega and get me on their review copy list. I need to review this game!
Posted by Zach at 1:01 PM

Oh my goodness, it's like they looked at your life and said, "Let's make a game for THAT guy.

I've seen this being played before at some arcades. The dinosaurs certainly look quite accurate (special moves aside), but there aren't enough of them! (Yes, I am greedy)

And would you look at the list of dinosaurs in the game!
http://www.dinosaurking.com/cards/

There's also an anime, with even more species!
http://www.dinosaurking.org/

Oh, just found this. If the info is accurate, there's tonnes more dinosaurs in the game and anime:

I'd say the cartoon was made for me too...if it were even remotely watchable. Pokemon has better writing than this! Also, the juxtaposition of the 3-D dinos and the 2-D everything else is jarring to say the least.

As for the game, I might look into it. It would be nice to play a game featuring dinosaurs that didn't involve you shooting them.

"Also, the juxtaposition of the 3-D dinos and the 2-D everything else is jarring to say the least."
The Japanese have never been good with CG in anime for some reason (see also: Zoids and most of their Transformers shows)...