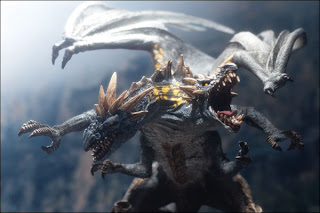 When Leedy first described the corpse of this "feral dragon" in 1898," he must not have known what to make of it. The type specimen had two heads and an extra pair of small, two-fingered arms. Aside from even these peculiarities, Feradracos was an exceedingly strange beast. Its most atrophied wings have six fingers, two of which form "fingers" which are not hindered by the patagium. The dragon's large, gaping mouth is filled with procumbent teeth which seem too large for the space allowed, and the skull is decorated by all manner of spines and protuberances. The shoulders and knees are covered in bony armor plates, and a single row of small but tightly-packed "bristle" spines runs down the back. The short hindlimbs are functionally tridactyl, while the main forelimbs have four fingers, including a slightly offset thumb. Feradracos is an ugly grey color with yellow spots running down either side of the neck and body. The patagium is light grey with black patches. In all, Leedy described the beast as being "unsettling." Luckily, the dragon is quite small, reaching about ten feet long, with a wingspan of about eighteen feet. It is completely flightless, and Leedy noted that the wings have virtually no practical use.

We now know that Leedy's type is not diagnostic of the genus. It appears that he stumbled across a pathologic specimen which somehow survived to adulthood with a bifuricated cervical series, misshapen wings, and an additional pair of arms. In fact, specimens described since Leedy's initial publication have confirmed that, while the dragon may still be described as "unsettling," it is nowhere near as strange as previously thought.

Virtually all known specimens have a single head, although Burke (1955) noted that several animals did have bifuricated cervical series, suggesting that a "double head" is unusually prevelant in this species. The unusual fourth pair of limbs, which unfortunately led to the creature's species name, have never been seen outside of Leedy's type. The type's wings were also unique in having six digits. In every other known specimen, the wing consists of five digits, and all are integrated into the wing surface. The wings are still quite small, however, and Feradracos remains flightless. One interesting aspect of Feradracos' anatomy which Leedy did not mention is the bifurication of the last few caudal vertebrae. Like Megalodracos, Feradracos has a pair of "fingers" at the end of its tail, although their use is not clear.

Although Feradracos' range overlaps that of Eowyvern, the two have never been seen together. The more impressive armament of the former suggests that the two animals go after very different prey. Feradracos is a lowland predator, and has been seen stalking antelope as well as slower moving animals including wildbeast. Feradracos appears to be a perpetual loner, and two animals have never been sighted together. Because of this, their mating habits and group dynamics are sadly unknown. What's more, juvenile animals have likewise never been seen. Given the taxon's rarity, Morgan (1992) suggested that Feradracos is on the verge of extinction, perhaps pushed to the brink by some genetic disease resulting in the mishapen individuals described by Leedy and others. Webb (1995) suggested that a basic malfunction in the HOX genes of Feradracos is what causes so many abnormalities, and that the species' outlook may be grim as a result. "The distinct lack of sightings of juvenile animals, in addition to the species' already-rare occurances," she wrote, "indicates that Feradracos is on its last legs as a viable taxon."

Irwin (1996) theorized that Feradracos and Megalodracos may be sister taxa, given the shared bifuricated tails, cranial horns, and limb construction. The two may have split during the Miocene, with Megalodracos' ancestors heading north, while Feradracos' ancestors flew south. If true, Feradracos would be another member of the ever-expanding Eudracocidae. Genetic tests are not currently planned, although efforts are underway to preserve the species in zoos. There, undesirable traits could be bred out over the course of several generations, and Feradracos could be re-established. This would also give draconologists a rare opportunity to study it in depth.

Very tragic indeed, sir. One can only hope that such a strange and, uh, beautiful (?) creature can remain living in the world, if only in captivity.