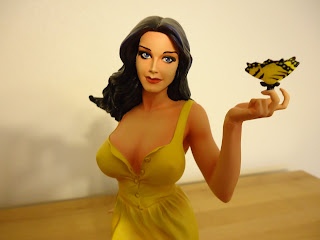 Brandy Carter is one of the main characters in my favorite (now defunct) comic strip: Liberty Meadows. Written and drawn by Frank Cho, Liberty Meadows is funny and sweet, and Cho's art is beyond excellent. The man's seen a glut of Marvel work recently, but I hope he gets back to Brandy & Co. soon, as I miss them terribly. I've been in love with Brandy since the day I laid eyes on her back in college. I was a convert to Cho's website, which was at that time a message board, and I remember being excited about the announcement that a statue of Brandy was being sculpted by...Clayburn Moore, I want to say. Every once and awhile, he would post WIP pictures, and they were amazing. When the product finally launched, it was way too expensive for my puny wallet (like $250). 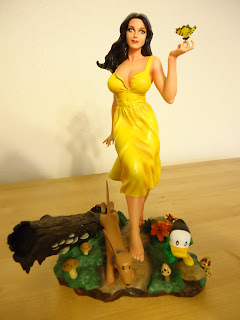 So imagine my surprise when, several years later in downtown Seattle, I discovered Brandy in a comic shop called Zanadu, sitting on a high shelf, for $180 bucks. I asked the shopkeep to take 'er down and open 'er up so I could see what I was getting myself into. Brandy was, as always, gorgeous. I probably should've thought about it (we weren't exactly rich back then), but I didn't, and I was rung up right there. The fella didn't even charge me sales tax 'cause I'm from Anchorage, where they don't have sale's tax. The rest of the day was spent lugging my luggage and Brandy through downtown Seattle, and even back to PAX Prime (the first and last time I went) because check-out time at my hotel was 11 a.m. and my bus to the airport didn't leave until, like, 3 p.m. So that wasn't terribly fun. 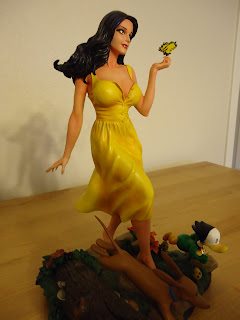 So I eventually got to the airport with my luggage, coat, and Brandy in tow. I told the woman at the gate that I can't check her because she's fragile, and she didn't have a problem with it (phew). I had a whole row to myself on the flight back (remember those days?) and I put Brandy on the seat next to me. Eventually I was told she had to go up in the overhead bin, but I was happy to see that she was snuggly secure between two other bags. I got her home and was almost immediately assaulted by my wife, who wanted to know what the hell I bought with the credit card in some store called Zanadu for $180. I proudly showed her Brandy and she immediately understood, though was still not super-happy with the price tag. 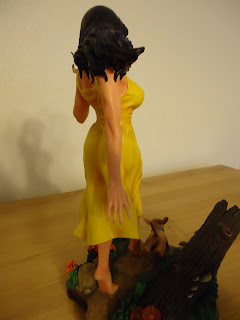 I took Brandy out of the box and was sad to see two flaws pop out: the butterfly on Brandy's middle finger had broken off, and Oscar's tail was cracked and bent. Luckily, some super glue fixed the butterfly and I just bent Oscar's tail back to where it was supposed to be. Brandy is just incredible--definately my favorite figure, although the term "statue" is better here, since she appears to be resin. The detailing on the base is particularly impressive. With its colors and woodland features, it lends a certain atmosphere to the scene, which I love. 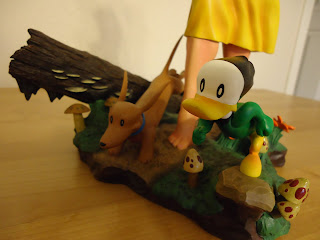 Oscar and Truman are running along in front of Brandy. I really like the detailing on the fallen log, which has fungi growing on it. The mushrooms are a nice touch, too. I actually don't love Truman's sculpt, because you can see the seams along his shoulders. Brandy is also walking wholly on her tip-toes--on both feet--which looks uncomfortable. It's a little too exaggerated, almost as if she's wearing invisible high-heels. 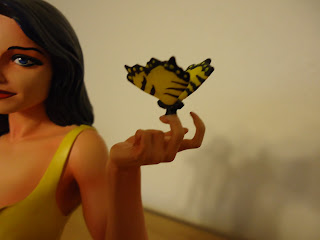 The butterfly is nice touch, and surprisingly detailed. I like to think I flawlessly reattached it to her finger. Brandy's fingers are nicely sculpted, too, and include nicely-painted nails. What is clear upon close inspection is that Brandy appears to have been painted by hand. Wherever colors starkly change, for example the line separating her hair from her forehead, there is some color blur or overlap. You don't see this with my other figures. While many might view that as an irritation, I get a "home-grown" feeling from it. Somebody really put a lot of work into this girl, and it shows--flaws and all. One of the really interesting things about Brandy that I don't see on my other figures is the paint scheme. Especially on her dress, there are often two or three tones of a given color, which I assume adds to the...shading effects? It's not really clear, but it's shockingly well done and consistent throughout. Similarly, her skin tones differ in different areas. Brandy's black hair is about 70% black and 30% dark blue--black-haired characters in comics often have blue highlights in their hair so that it's not just a flat color. It looks a little strange in 3D, but hey. 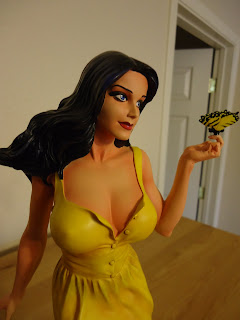 Aside from the Marvel Girls, Brandy here is the only figure (statue) that my wife approves of, because she's "the most realistic." I concur for the most part, although her torso is shockingly short and nobody with breasts that big wanders around on their tip-toes without a bra. Brandy's rack is pretty central to the entire piece, actually: her top is flying open, her nipples are apparent, and her unrestrained breasts are assuming their natural, sidewinder positions. This is just fine for me, but it's something The Missus would usually object to. I should just be thankful she doesn't! 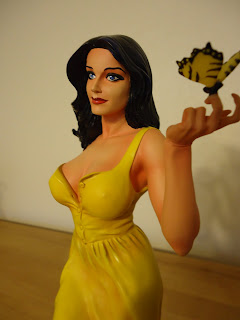 Aside from Truman's arm seam, the only thing that kind of bothers me about Brandy is her face, which is totally unemotive. She doesn't look particularly happy, sad, excited, or bored. She HAS a face, and it's a beautiful face with a great pain job on her lips and eyes, but...what's going through Ms. Carter's head? She seems to be primarily concerned with not tripping over anything while on her tip-toes and simultaneous remaining still enough so that the butterfly doesn't flutter away. It's funny because the smallest alteration--maybe a smile on one side of her lips--could totally change the mood of the piece. From this angle, you can see not just the nice detail of her buttons and creases on the dress, but also the button slits on the other side of the dress. As I've said in reviews past, I really treasure little details like that. 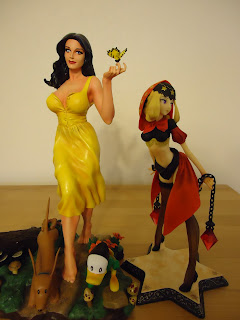 At a tad over 12" high, Brandy is my largest figure by a good margin. She occupies a central position among my girls for that reason. Here she is standing next to Odin Sphere's Velvet for an idea of her size. Brandy received a limited release...I want to say only 1500 figures were produced, a figure verified by this eBay post. Our girl retails for about the same price I bought her for, minus shipping, which is surprising given her rarity. Brandy is a gorgeous, wonderfully-sculpted figure who I absolutely adore. I highly recommend her if you manage to stumble across her somewhere. If nothing else, go buy some back issues of Liberty Meadows, which is a real hoot.

Next on the docket: Velvet!

Postscripto: We got a new camera. It's a Sony Cyber-Shot and I like it a lot, but it needs a screen protector for the massive viewing viewing window the back. The thing boasts 14.1 megapixels, which is a significant leap forward from the old camera's 4.0 megapixels. I am still experimenting with where, exactly, to take pictures of my figures. Lighting is the main concern. I'll work it out.
Posted by Zach at 1:27 PM

What ever happened at the end of that comic? Did Brandy wind up with Frank? Also, I dig the statue.