Look out! He's got a Plasma Cutter! 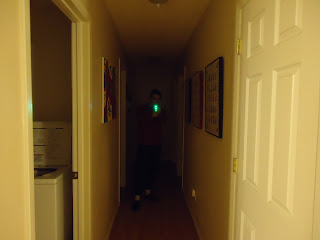 I got the Collector's Edition of Dead Space 2, which, by the way is one of the best games I've played in a long time. This box set came with a small replica (fully functional, as you can see) of Isaac Clark's ever-useful Plasma Cutter, with which our hero dismembers his Necromorph enemies with ease. 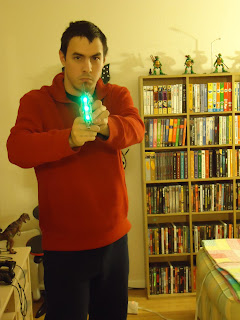 So where've I been lately? The answer is "work," where I've become so swamped that the company helpfully hired me an assistant. So between my usual job, training her, and double-checking her work, it's been...busy. On the other hand, I just bought an Xbox 360 from my brother yesterday, so I may yet enjoy the happiness that is Super Meat Boy. I haven't been too caught up on paleo papers, unfortunately. When something big comes down the pipe, like two new iguanodonts or something (that was last year), I try to find time to read it. I haven't drawn anything worthwhile in what seems like forever.

I'll get back on the ball eventually. At least it's lighter now during the day, and that light lasts much longer. Two recommendations before I go: Dead Space 2 (obviously) and "Danger Girl: The Deluxe Edition" published by IDW. It's a nice hardcover collection of that old 90's "Danger Girl" comic drawn by J. Scott Campbell. Really fantastic stuff, very bombastic and lighthearted and action-packed. More to come, I promise!
Posted by Zach at 6:57 PM