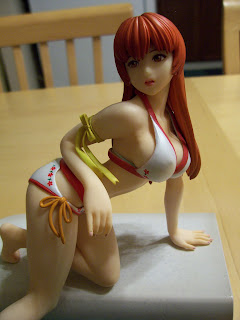 This is my most recently-purchased and one of my favorite figures. It’s one I thought I’d have to buy on eBay or Amazon at some point because I didn’t know when she was coming out (different websites said different things), and there sure as hell wasn’t any chance any of the local comic shops would be importing her. Well, sometimes I love being wrong. On a completely random day last month, I stopped at A-1 Comics on my way to Eagle River. After wandering around the DC area, hoping to find a discounted “Women of the DC Universe” figure (no such luck), I wandered through the anime figures only to find, sitting on a high shelf, Kasumi. My jaw dropped. It was too good to be true! Now I can save on shipping costs (this is a real concern in Alaska)! I plucked her up immediately, of course, paid the shopkeeper, and took my new girl home. 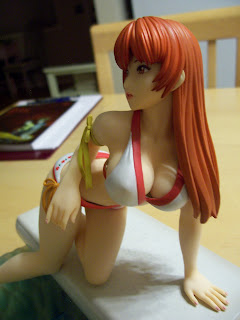 Kasumi is actually my second “Venus on the Beach” figure after Kokoro (stay tuned). There are several other figures in this line, including Hitomi, Lei Feng, Tina, and Ayane. I don’t remember whether or not Christie and Lisa have gotten figures yet. All are based on, predictably, the Dead or Alive Xtreme Beach Volleyball series rather than the fighting series proper. They’re all also cast-off figures. What’s a cast-off figure? You’ll find out in a minute. 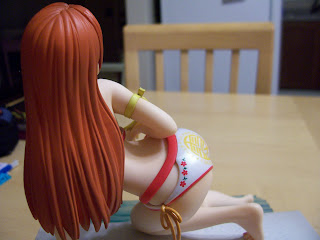 I'm not entirely sure what to call Kasumi's pose. She's down on three limbs, poking her toe in the water to test the temperature, I guess. It's a really wonderful sculpture--every part of this girl is rounded. No hard edges here, and that's something I appreciate. Here's something strange to ponder: Kasumi's paint job. It's fantastic--no point outside the lines, and her skin tone is great. The color scheme for her main swimsuit here is, obviously, taken straight from DoAX, though I'm completely unaware of its name. Her hair is long, and falls wonderfully behind her, hiding her left shoulder in the process. 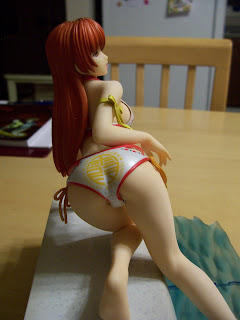 As my friend Erik might say, "Dat ass." Unlike her in-game counterpart, Kasumi is gifted in the tush department. This angle also lets you get a look at the musculature of her legs and popliteal (kneepit). You can also make out her almost nonexistant nose (that does bother me). I'm not sure what's going on with that yellow ribbon around her upper arm, though. Also notice the base: more on it later. Well, now that you've seen her "normal" costume, I can tell you about her secondary costume, and what "cast-off" means. 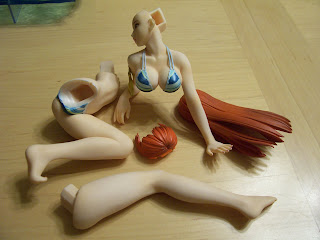 Kasumi readily falls apart in a rather disturbing manner. As you can see, her hair separates from the head in two places, her right leg pops off at the hip, and her torso frees itself from her lower body right below the breasts. This is all in an effort to get her red and white bikini off so you can see her "painted on" blue bikini. There are just a ton of separate pieces with this figure: 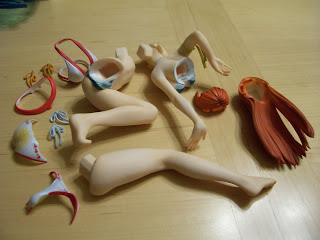 So many pieces. Thirteen, in fact, and that's not counting the base, which is made up of three distinct pieces. To get her red-and-white suit on, you have to wrap the top strap around her head, secure the bottom strap under her breasts, slide the top strap of her bikini bottom around her lower body, snap the two body halves together, then attach the front of her bottom to the back before snapping the leg back on, then swap out the ties (white 'n' yellow, see?), then finally put her hair back on. It's a goddamn hassle, so I only do it once and awhile. Also, as I've learned with Kokoro (stay tuned), it eventually starts messing up the paint job. 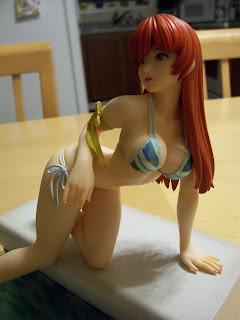 So here she is in the blue bikini. My wife thinks it's a little over-the-top. Keep in mind, though, that she thought that the BOME Kasumi's breasts were "spilling out." This is clearly incorrect! By comparison to this figure, her breasts were safely contained. Her blue bikini here is painted on, but it's also sculpted and textured, which is impressive. I actually don't think her breasts are portrayed very realistically here (YOU DON'T SAY). Now now, I say that because they're not really falling down: they're still kind of sticking out, forward. Her red-and-white bikini top was supporting them, but they should be following gravity a bit more here. 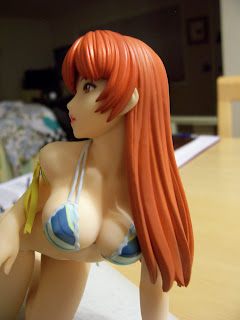 See? I'm not gonna complain too much about it. But you can see the lacy sculpting here and the double-ties. It's a good sculpt, it really is. Interestingly, she's showing about as much cleavage here as in her other suit. Although it's not clear from this shot, they even sculpted where the strap on her back kind of digs into her skin. 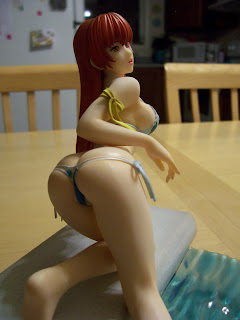 You can definately see how much more skin is showing with this outfit. Her asscrack is showing, which is...I mean, it's a feature. She's also clearly wearing a thong. That's not my favorite part of this sculpture. Note also the ripple effects in the water, which is sort of cool, honestly. I'll mention here that her hands and feet are really fantastically done: individual fingers with knuckle creases--same with her toes--and her left foot shows clear bone structure. 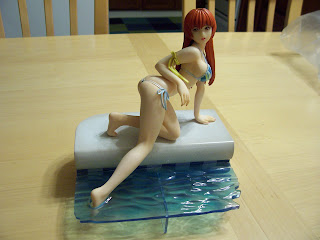 Here's the whole figure, base 'n' all. You can see the stand for the water, and the hole where Kasumi's foot fits in. To get her on the base, you put her foot in at an angle and rotate her body to where it's currently sitting on the "poolside." My policy--which has worked just fine so far--is to not mess with my cast-off figures once I figure out which outfit I want them in. Like I said, it's a pain to keep changing up their appearance, although it does offer some variety. 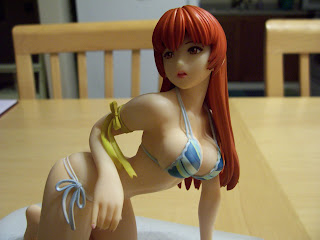 I do have a difficult time deciding which of my figures is my favorite, but Kasumi here might be tied with Kokoro and Velvet for that particular medal. She's a really quality sculpture with a good base and very few flaws. She was not cheap ($100), but she was much cheaper than I would've gotten off the internet (add shipping), so I'm happy I found her. The base is 6.5" long, and the top of her head is 7.5" heigh on the base. She's not too big, but consistent with the size of Kokoro (who's from the same series). They look good together--I'll have to post a picture of them both when I review Kokoro.
Posted by Zach at 7:24 PM

She looks great! I wasn't all that fond of the early Venus on the Beach figures but Kotobukiya's done a real nice job with Kokoro and Kasumi. Hopefully they'll keep it going, I'd really like to see figures of Lisa and Christie, and maybe a nicer Hitomi than either of the ones they put out.