Ladies of the (Halloween) Night

Okay, I've got a confession to make: I haven't started shit on the Medusa. Instead of starting on her, I reworked the Harpy, still basing her on Nadine Chanz, but with an eye on measurement this time. Came out much better. I've given them both clothes: 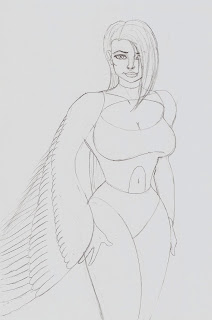 Much better, right? The Powergirl outfit is coming together nicely. I don't know if I like that cheekbone or not...I can just take it out later. She doesn't look so much like a harpy as a woman dressed as a harpy, though: this is something I must fix. The Succubus, however, looks a lot more like a Succubus. I think it's the horns, mostly, but also the garb...and the wings. I suppose that, instead of some kind of superheroine outfit, I could give the Harpy something a bit more...medieval. Something to keep an eye on, that's for sure. 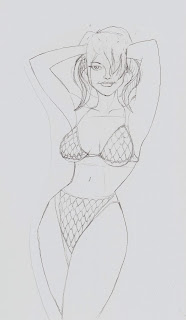 Don't ask me where those horns originate, because I'm not sure yet. I think right behind the ears, but honestly, at this juncture, it's not my main concern (looks at watch). I like the scale mail though--inspired by Red Sonja if you haven't already guessed that. I'm very happy with how the Succubus is turning out. The final may well have the fingers of the right hand sticking out of the hair. As Erik pointe out a few days ago, it sort of looks like her hand is reaching into her cranium. As is sort of noticable here, the bikini used to come up a little higher, revealing the bottom "rim" of her breasts. My wife suggested that was kind of overkill, and I agreed. The straps will be leather ties, and the scales are all attached to a leather cloth. The horns will be textured like a ram's.

And here's what she flies on: quadradactyl bat wings. Because I'm lazy, I'm going to merely flip this image for her other side. The wings originate from the shoulder blade, and the largest part of the patagium connects more or less right above her butt-cheek. Thoughts? Comments? I apologize for the crappy formatting. 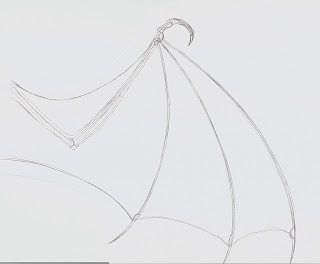 I started on a long comment about how I didn't like the harpy, but I had to look a few things up while I was doing so, and I actually like it more now.

The harpies were storm-goddesses. Hesiod makes them the daughters of Thaumas ("marvels") and Electra ("amber", possibly a reference to lightning), both sea-deities, and the sisters of Iris (the rainbow). So the "superhero" get-up is more appropriate than I initially thought. The story about them attacking King Phineas and stealing and befouling his food seems easily readable to me as storms sweeping in from the sea and destroying the country's crops. I still think that she looks a little too friendly rather than awful (in the old sense of the term). I'd probably suggest making the succubus a bit more jaded, too, to reflect that the allure of a succubus is meant to disguise the soul-destroying emptiness underneath (which, depending on how pessimistic you feel like being, could really work in well with the pornography/pin-up girl concept).

The Red Sonja bit might actually be more appropriate for the Gorgon design. The Gorgons were probably war-goddesses; their names Stheno, Euryale and Medusa translate as the Strong, the Swift (literally "wide-ranging) and the Cunning, and Diodorus Siculus refers to a war between the Gorgons and the Amazons. There's a marine connection there, too - the Gorgons' parents Phorcys and Ceto (the whale) were both marine goddesses.

There's my bit of criticism, given by someone with no artistic abilities of their own ;-) .

Thanks, Chris. I might not have time to implement all your suggestions (and I love 'me) but I appreciate your research! The concept is halfway between actual mythological monster and Elvgrin/Vargas pin-up.

I probably will transfer the scale mail to the harpy, though, at the very least.

Forgot: Medusa might get scrapped due to having only until the 15th to get this done. :-(

Chris's comments are right on the money. I just wish I had time to do this show.