An American Paleoartist in London: Day 4 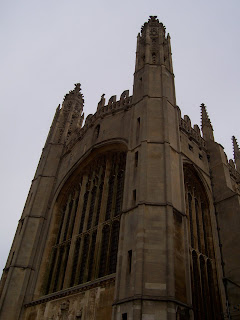 The more I take the Underground, the more I wish we had something like it in Anchorage, though we haven't the population nor the infrastructure to support such a system. It gets you from place to place really quite fast, and if you have an Oystercard, it's surprisingly cheap. The only danger is accidentally going the wrong way, although even that is basically moot if you can tell your north from south. I suppose there are some complaints to be had, though: mainly the lack of ventilation on the trains themselves. Hot and stuffy, that's the bottom line. But it goes by quick, as I said before, and if you're switching lines, there's some fresh air between trains.

And today we took the actual train to Cambridge for the day, at the suggestion of Mo Hassen. Cambridge is a lovely little college town where there are more bikers than drivers, and more walkers than both combined. Our first stop was King's College, which is not a learning institute but a massive architectural tower built by Henry VI-VIII in devotion to God. It really is an amazing structure, especially the interior, with a huge vaulted ceiling, beautiful stained-glass windows, and complex stone sculptures within. Afterwards, we took a trip to the Cambridge Museum of Earth Sciences, a treasure trove of European fossils in collection trays and cabinets. Hundreds and hundreds of fossils in there, including a few collected by Mr. Charles Darwin himself. Darwin is quite the celebrated scientist in England, which I most certainly appreciate, myself coming from a country that views this man as inspired by the Devil to undermine God or something. 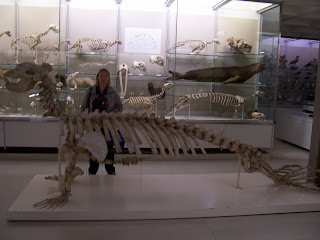 I saw Thomas Holtz there, too, and said hi. He was on the SVP Darwin Heritage Tour. After salivating over rocks for awhile, we walked across the street to the Cambridge Zoology Museum, which was even better. Its specialty is extant animals, mostly in jars or in the form of mounted skeletons. The skeletons were so wonderful--every group of mammals was represented. See above: Gina with The World's Largest Pinniped Ever. There were some extinct taxa down there too, most notably a glyptodont and a ground sloth. All of the skeletons were wonderful, though. I especially liked the tapir and the rhino. There was an indricothere skull, and man, is it BIG! After that, we walked to the Cambridge University Library, which is enormous, and saw a small exhibit featuring Darwin's writings and sketches, including a 1st edition of On the Origin. Then it was a very long walk back to the bus stop!

Now here's one thing I noticed, really, for the first time today: where do people EAT in this country? It seems to me there are two kinds of restaurants. In the first kind, you sit at a table with wine glasses and a fancy menu posted on the doors outside so that if you're not super-rich (like us!) you can just up and avoid it. The other kind is a sandwich shop. And I don't mean Subway. I mean, Subway is an option, but my wife has developed some kind of anti-Subway thing, even when it's clearly a superior choice to whatever else is offered...which is unbelievably frustrating.* The sandwich shops here involve pre-made sandwiches in triangular boxes. You literally pick out a sandwich and pay for it, then leave (or stay, but it will cost extra if you stay)(does not compute). Those are my choices. Well, there's Burger King/McDonalds, where you cannot order your food from somebody who speaks English, a hassle I'm not eager to put up with. It's not like the sandwiches are BAD or anything, they're just not great, either. I need to find one of the Indian food restaurants that Scott's always talking about...**

*Today was diagnostic of a very common theme with my darling wife: we pass three or four places with real food (not sadwiches in boxes) (including Subway) and she says it's too expensive (it's not). Out of frustration, she just marches into a Pizza Hut and says she'll get something somewhere else, as if I wanted to go to Pizza Hut in the first place. We leave, she just starts walking in a random direction, only to turn around a few blocks later and says "you were supposed to be taking us to the first place you pointed out." If only she'd mentioned this before! Eventually she just settles on, yes, a boxed-sandwich shop and continues to be angry about it. It's as though she's got some specific American diner in mind, but fails to accept that we're in Europe, where they might do things differently. I, too, remark often that our choices are limited, but it's also something I've accepted. My wife is not always (rarely, in fact) fun to travel with!

She's gonna chop your balls off while you sleep, shouldn't be calling her out in front of the Internet, lol!

It's generally assumed tourists have more money than sense, and you're in the tourist area. Still, if you leave the main thoroughfares, and venture into the twisty maze of side-streets, you should eventually be able to find the cafes the locals use - good simple food at low prices. The tables might be rickety formica, but that doesn't affect the taste of the meal.