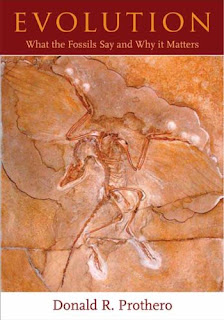 I just read Donald Prothero's excellent Evolution: What the Fossils Say and Why it Matters, and I can't recommend it highly enough. It's for anybody interested in science, the scientific method, or how science works and progresses. While the book has two distinct themes, Prothero's main point is to provide an understanding (for those without one) of how the discipline works, and why it works as well as it does.

During the first half of the book, Prothero takes Creationist arguments about evolution or, more often, science in general, and tears them limb from limb. The man gives the best all-bases-covered rebuttal of "flood geology" that I've ever read. The man isn't trying to be mean, but rather is showing why science comes up with different conclusions than men of the cloth, and why the latter's arguments never hold water.

The book's second half discusses animals not known to exist in Creationist circles: transitional forms (eek!). Everything from lampreys to arthropods, Euparkeria to birds, fish to amphibians, Dimetrodon to mammals--the fossil record is wonderfully complete, and this book really lays it out there for you. Prothero is careful to recognize that there is no such thing as an ancestor-descendant relationship. Aside from a few recent extent examples, you can't point to, say, Archaeopteryx and say that it's on the direct line to birds. That's impossible to test. However, based on the number of characteristics it shares with birds (and dinosaurs), you CAN say that Archaeopteryx is probably kissing cousins with that hypothetical ancestor.

It's also worth noting (as Prothero does) that the fossil record will never be 100% complete. The fact that we have any fossils at all is miraculous, so we're lucky to have recovered such transitional forms as Tiktaalik and Yanoconodon. It's also damn cool that some transitional forms are still alive today, like coelocanths and velvet worms. So really, while you can't show a steady progression of fossil forms (or living forms) (for theoretical and practical reasons), you can do this:

Acanthostega: Shallow-water tetrapod, mostly-mobile head, folded enamal teeth, loss of all but pectoral and pelvic "fins." Structure of fins similar to Tiktaalik except the "finger bones" have been arranged in a half-moon fashion around the distal end of the radius/ulna, giving the creature eight distinct fingers. Still restricted to water, retains fishy tail.

I mean, how can you not see the progression there? That example and many more are found in Prothero's excellent tome, which I highly recommend.
Posted by Zach at 3:55 PM

This book is on my list, not least because of the many illustrations by Carl Buell.