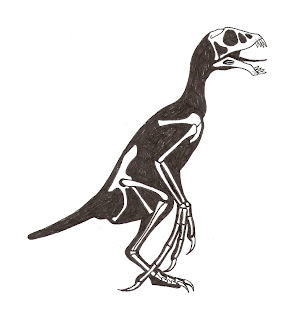 Well, here's a basic skeletal drawing (skipped the vertebrae and ribs because they take forever) for Expidexipteryx. This drawing will serve as the basis for my life restoration this weekend. The skeleton is pretty beat-up, with lots of key missing parts (hands, feet) and a badly crushed skull. I took the unknown elements from Scansoriopteryx and imagined what they'd "grow into." For example, I made the third finger a little shorter in relation to the other two fingers with the assumption that it would have negative allometry compared to the 1st and 2nd digits. That's purely as assumption--the reverse could well be true. Not sure about what kind of dentition the little bugger had beyond the procumbent incisors, so I simply didn't include any.

Like I said, I didn't include a spine or ribs because it would've taken much longer. I made the tail stiff but a hair longer than the skeleton would imply. This is to cover two bases: One, that a few vertebrae might be missing in that irritating tail break in the fossil, and Two, I imagine that the tail was wrapped in a stiff bundle of tissue given the ribbon-like tail feathers (they must've had deep quills) which may have artificially elongated the "external" tail.

Let me know if anything is deeply wrong with this reconstruction before I start drawing skin and feathers onto it!
Posted by Zach at 2:18 PM

"Let me know if anything is deeply wrong with this reconstruction"

Well, yeah:
[...]"I didn't include a spine or ribs because it would've taken much longer."

The fossil is said to have eight teeth in the upper jaw (per side) and five in the lower. The authors give their measurements in the supplementary .pdf(along with some other skeletal measurements). I can send you a copy if you'd like....

I've got the supplement, Neil, thanks. I just didn't pay much attention to it, other than the additional photographs. :-) I'll check it out, though.

The skull looks pretty messed up the way you've drawn it. Very un maniraptorian. Almost makes it look like a plesiosaur. Also the upper teeth dont seem to actually be as long as the bottom teeth. That they appear as such in the fossil is because of an illusion caused by the plane of splitting through the skull. What you see is mostly root.

You also have the pubis way too retoverted.

Hmmm...thanks for the tips, Christopher. It looks like I've got things mostly correct, although you're right, there are a few things wrong. I made the skull tall because the description says that it's tall and short, comparing it to those of oviraptorosaurs. Aside from that, I think my proportions are pretty similar to the DeviantArt drawing (which is awesome, by the way). I'll change a few things for the final draft--thanks again for your input!

There are a few more skull alone reconstructions posted at dinoforum if your intrested. One by Mickey Mortimer and another by Rutger Jansma. Also a couple of insitu drawing of the skull done by various members.