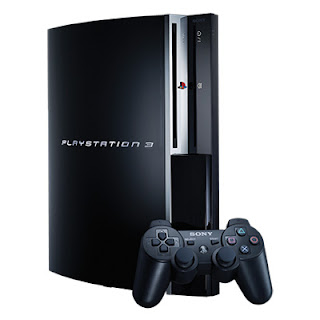 So my brother needed money to get his new car insured. His new car is pretty awesome, by the way--it's an '08 Ford Focus. Anyway, he offered me his PS3 + games and accessories for a mere $300. He knew that I'd been shopping around for a used system for months. But really, three hundred smackers is a whale of a deal. Why? Because the 40 gig'er is, by itself, $400.
So I got a deal. I traded Rainbow Six Vegas in immediately for Ratchet & Clank Future. People tell me that GTA4 is very fun, though I haven't tried it yet. Call of Duty 4 is beyond awesome, though. And now I can play Ratchet & Clank and MGS4 whenever I want. My network name is Sillysaur. Add me, and toss your network name in the comments and I'll add you! And now I can stop ignoring all the PS3 previews and reviews in GameInformer, like Bioshock, Silent Hill 5, and Tomb Raider: Underworld.
Posted by Zach at 11:28 AM

Wish I could justify one. Perhaps if I could find a used 1st-gen PS3 for $250, I'd do it. But supporting PS2 games is a must at this point.

Pity they couldn't offer one without network gaming support, instead of without PS2 support.

I haven't played video games since I lived with my ex and he had an original X-box. We played Halo a lot. And Diablo II on our computers.

J and I tried out the Wii the other day. I whooped his arse at tennis and at boxing. It's fun, but not my syle...I much prefer games like Final Fantasy and Myst and the Zelda games.