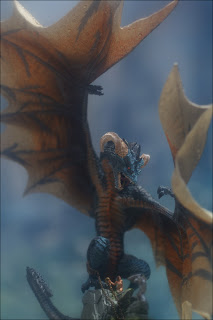 As far as wyverns go, none of them are quite as strange as Caprawyvern mencotti (Dawson, 1976). Large and ferocious, the "goat wyvern" is also one of the most dangerous. Caprawyvern is a fairly rare wyvern that lives in the American southwest, feeding primarily on domestic cattle. The creature is not above stalking smaller vertebrates, however, and in fact young wyverns are fond of jackrabbits. At twenty-two feet long, with a wingspan of between fifty-six and sixty feet, Caprawyvern is a sight to behold. The wyvern's most obvious feature is its namesake--a pair of curved, ram-like horns emerging from the head, one behind each eye. The horns are used in intraspecific territorial and dominance disputes. Only males seem to have curved horns. Like mammalian rams, females have fairly small, back-swept horns. The large horns of the males are in stark contrast to the relatively small skull and narrow mouth.
From a taxonomic perspective, however, Caprawyvern's most striking feature is the structure of its wing, which is totally unlike any other known living wyvern. The arms are short but dominated by an elongate humerus. The radius has been lost--only a rod-like ulna remains. The radius' job is supplemented by a strong tendon which seems to help flex the tiny hand bones. Two fingers, most likely digits I and II, are free from the patagium and assist in prey capture and terrestrial movement. The other fingers have degenerated completely, replaced by a series of nine rigid cartiliginous structures. Three of these "spines" eminate from where one would normally find digits III-V, two laterally from the wrist, two more from the elbow, and two more from the middle of the humerus. In addition to these "main" spines, a smaller spine erupts from between each pair of "main" spines but does not reach the end of the patagium. Rather, Benton (1994) believes they serve simply to strengthen the patagium.
The spines are rigid and inflexible. The groups of spines are so distinctly placed along the arm that they have each been given name. The "manual group" is the first group and erupts from from the distal end of digit II. Unlike the others, the manual group is composed of four spines--two long spines, a short spine, and a final long one. The "carpal group" originates from the wrist and is positioned perpendicular to the ulna. The "elbow group" originates, as the name would imply, from the elbow. Finally, the "humeral group" erupts towards the proximal end of the humerus. The longest spine in all the groups is CG-III, or "carpal group III," the second long spine in the carpal group. Benton hypothesized that the wing spines were a sort of hypertrophied version of pterosaur actinofibrils, though they obviously evolved independantly. Interestingly, Caprawyvern hatchlings only have a single spine per adult group (except the manual group, where hatchlings have two). Growth studies carried out by Delphi (1997) suggest that these single rods correspond to the "short" spines in adult growth stages, except for MG-I, which is the distalmost spine in both adults and hatchlings. The main spines grow out as the animal matures, eventually surpassing their predecessors.
As noted above, Caprawyvern is extremely hostile to territorial invaders. Five human deaths have been attributed to the goat wyvern, and there have been dozens of reported attacks. The wyvern apparently attacks from above with its talons, scratching and kicking while flapping its wings and screeching. Males are far more aggressive than females, though females are, themselves, surprisingly confrontational.
Without fossil forms, Caprawyvern would be impossible to place among other wyvern clades. The strange wing configuration alone makes classification difficult. Thankfully, a few extinct forms have shed light on the process by which Caprawyvern lost the more traditional wyvern wing. Zhouwyvern haduken (Ryu, 1995) is a small wyvern from China that only has four wing fingers, including a free thumb. What makes Zhouwyvern unique is that the humerus, like that of Caprawyvern, is unusually long while the radius/ulna is proportionatelly short. The structure of the wing fingers suggests that the wing was narrow. Ryu suggested that Zhouwyvern may have had a spine (or spines) erupting from the elbow, as such a structure would have deepened the wing surface. Another caprawyvernine, Protocaprawyvern tusconi (Elyard, 2003), only has three wing fingers, just one of which is connected to the wing surface. Its wing strongly resembles that of Harenadracos. Elyard theorized that, given the resemblence of the wrist and elbow joints to those of Caprawyvern, that Protocaprawyvern must have had cartiliginous spines from at least these two points.
As far as where Caprawyvern, Protocaprawyvern, and Zhouwyvern (the Ceratowyvernidae), we'll leave that to Mantell (2001), who suggested that, based on the unique curved horns and reduced number of wing fingers (four in Zhouwyvern), that the Ceratowyvernidae is a sister group to the Gigantowyvernidae.
References:
Dawson, G. M. (1976). The first comprehensive description of Caprawyvern mencotti, the well-known "goat wyvern" from the American southwest. American Journal of Zoology 23(4): 67-89.
Benton, C. S. (1994). On the unique wing structure of Caprawyvern. Draconium 35(1): 88-94.
Delphi, J. (1997). Ontogeny and Caprawyvern. Wellnhoferia 15(2): 105-111.
Ryu, K. (1995). A primitive fossil wyvern with similarities to Caprawyvern (Dawson 1976). European Journal of Draconology 86(3): 361-366.
Elyard, S. (2003). A new spine-winged wyvern from Arizona. Draconium 44(2): 235-241.
Mantell, G. (2001). A broad look at wyvern systematics. European Journal of Draconology 102(2): 305-311.
Coming Up: Harryhausina marinus, a marine wyvern named after the famed stop-motion animator!
Posted by Zach at 9:46 PM

Say, you wouldn't happen to have a copy of this paper, would you? I seem to have lost mine.