Society is on the Verge of Collapse 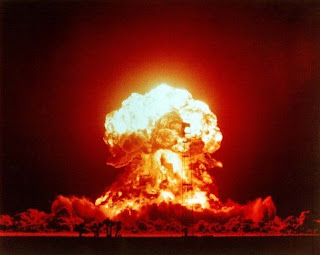 Every time a homosexual couple kisses, an angel drops a nuke (apparently).

Headline of the day: People are retarded. I've never weighed in on the issue of homosexual couples, but I'm gonna go ahead and make my opinions on the subject known.

1) Who freaking cares. We're fighting a war in Iraq, gas and food prices are at an all-time high, the Euro has surpassed the American dollar to such an extent that if it becomes the new world economic standard, we're screwed, America is facing an unbelievably important election year, and what are people making a flap about? Two lesbians kissing at a sporting event. Way to prioritize, America.

2) Who freaking cares? Does it affect your straight marriage in the least? Will atomic bombs be dropped from Heaven Above if we allow these sinful unions to continue? Is God shaking his Almighty finger in our general direction right now? It seems like (forgive my generalization) it's the religious conservatives who really get riled up over gay unions. And why? It's an affront to their religion, sure, but why condemn it? How does it affect you, religious guy? If God takes you into Heaven and casts the gays into a lake of fire, why do you care? Are you actually concerned for their souls, or are you worried that God will say to you, "Hey, you could've done something about this, but you didn't do enough, so into the flames with you!" Are you worried about their soul(s), or yours?

3) Jim Ridnour, a 54-year-old, close-minded moron, says that he "would be uncomfortable" seeing lesbians kiss in public. "If I had my family there, I'd have to explain what's going on." Really? Are kids really going to say, "Daddy, why are those two women kissing?" No, they're not, unless you've beaten it into the heads specifically that two women kissing making God mad. Innocent children are going to think (Allah forbid) that kissing is associated with affection or love. They're going to think--wait for it--that the two women are in love! 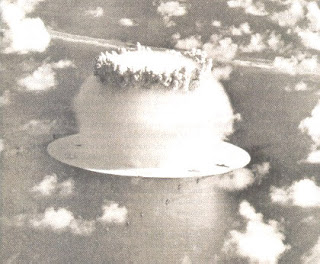 If you don't take the time to explain, in great detail, why two women (or men) kissing is wrong, kids are going to grow up thinking it's perfectly all right, which is what we're trying to accomplish. If, for whatever reason, your kid turns to you and says, "Daddy, why are those two ladies kissing?" You can say, "They're in love, sweetie." And the kid can think whatever s/he wants. Don't make an excuse for the homosexual couple, but accept it as what it is.

4) Gays and lesbians aren't out to thumb their noses at society. They're in love.

5) Over 50% of straight marriages end in divorce. Clearly, same-sex marriage is a pillar of excellence. What I'm really saying, perhaps sarcastically, is who are we to judge?

And that's basically my little political rant. I try not to get involved in these heated debates, but the Seattle story (hat-tip to Greg Laden) threw me into a miniature rage.

4) Gays and lesbians aren't out to thumb their noses at society. They're in love.

You haven't been to the straight fairs in SF, have you?

Why does your link go to the previous post? How am I to read and evaluate insanity if you don't link to it???

Yeah. Anyone who opposes gay marriage can't be taken seriously. This isn't even a conservative vs. liberal issue--this is an issue where legitimate conservatives and liberals should both agree 100% on: we do not deny rights to minorities in this country.

(Anyone who does isn't a liberal, or a conservative, they're fucking crazy.)

I get so effing fired up about gay rights. Both my brother and father are gay and our family have been victims of hate crimes. I headed over to that article and then to the comment board and WOW, is it scary.

I'm going to go ahead and chime in here.

Your decisions are yours, I can't control them, and wouldn't if I could. However I personally will be teaching my kids that being gay is wrong.

Why you might ask. That's just how I feel. I'm not saying shun gays, or hate gays, they're still people. I'm just saying I completely disagree with thier lifestyle choice. Same as I do drug addicts. I don't think drug addicts make good choices, and I'll be teaching my kids that drugs are bad.

As for actually getting married. No. Marrage is between a man and a woman, that's how it is, was and always will be. End of story.

I came across your post and wanted to point a few things out. Some of the points you had are very valid, if true. I do not hate homosexuals. I've got a couple friends that feel they are homosexual (one bisexual), and we simply agree to disagree on that issue, though we're still close friends (dare I say, best friends, to the point of me having to kindly turn him down when he has shown an interest in being more than friends). So no, I'm not a crazy bigoted hater out to make their lives miserable because of who they decide to kiss.

Why does this matter to the rest of us? For one, the lifestyle is very harmful. Knowing someone that is living the gay lifestyle is like knowing someone that is intentionally drinking a dose of poison with every meal. We wag our finger at people who smoke because they're sucking on cancer sticks... Well being homosexual is like sucking (no pun intended) on radioactive acid laced cancer sticks. Their sexual practices and lifestyle are very damaging to themselves and to everyone they influence. Did you know that even in this day and age after decades of constant "safe sex" teaching, the vast majority of gays still never bother to wear a condom? With AIDS and countless other STDs racing through the homosexual population at breakneck speeds (70% more likely to get STDs than a typical heterosexual), they still don't care enough to take precautions. They’re literally slitting their own wrists, even though they know better. They can't remain satisfied because they're looking for satisfaction in a relationship that is inherently unsatisfying. That's why they have so many lovers (often at the same time with or without their other lovers' knowledge). A gay marriage is an oxymoron because most of those “marriages” are what is known as an "open marriage", meaning they're technically married, but can have sex with other people on the side. Now either I've missed something, or that's not actually marriage...

These days, there is hardly such a thing as a life-partner among heterosexuals, and certainly not among homosexuals. Divorce is something to be avoided as much as possible, yet today it’s the easy solution to a bad choice in lovers and the inability to maturely deal with disagreement. That's tragic on so many levels, because divorce and infidelity rip at children, forever altering their lives for the negative. It's so sad when visiting mommy or daddy only on the weekend is the best possible substitute for a real family a kid will ever have. This is a terrible thing among heterosexuals, but it's the highest possible standard among homosexual relationships. If every few weeks daddy is bringing home a new bed partner and lover, how's that going to affect his daughter (adopted or otherwise). She's got no mother at all, has only one parent who himself isn't really sure if he's male or female, and his idea of a "boyfriend" is more akin to a throwaway sex toy than a meaningful lover. Of course that's not always the case, but it often is.

But it gets so much better than that! Now they're running around our schools recruiting and teaching that a homosexual relationship is just like a heterosexual one. The hilarity is that so often now anything Christian is banned (don’t offend anyone!), but the message of two people of the same sex loving each other (and all that that implies) is being taught from kindergarten up... Do you remember cooties? Well the homosexual movement is absolutely brilliant! What better group to target than the age group that thinks the other gender is gross? What better age to target than young people suddenly awakening to the world of sexuality for the first time, a world they’ve never thought of until then? So let’s get this straight. Christianity, the Bible, traditional moral high standards = bad... Unnatural (there is no such thing as a gay gene, and these people can't reproduce without breaking their sexual preferences or going to extremely advanced medical procedures, so in every sense of the word, it is unnatural), STD embracing, partner instability, public orgy parades, sexually depraved practices, and on and on the list goes, are considered to be good, "normal", and appropriate. What kind of topsy-turvy world is this!?

Two homosexuals kissing or sleeping with each other is not going to drop a nuke on the world. However when they heavily push everyone to think like them (even going so far as to use the court system to ban people from speaking out against homosexuality), society has taken a serious nosedive. When rabid STDs, a hundred plus bed partners in a lifetime, casual orgies, pedophilia and so many more other “wonderful” aspects of the homosexual lifestyle are finding their way into schools (guess what!? That's where your children spend most of their day!), we're all screwed. These people are out to radically transform society and they're taking it out on our kids, since they've realized adults have already made up their mind. Kids on the other hand have no solid understanding of the situation, and are like putty in the hands of the sex-centred gay movement. Who and what are you? A writer? A gardener? A Muslim? A teacher?... Who are they? People who have anal and oral sex with other people of the same gender... That's their biggest definition of themselves. Who they have sex with, and how. Open your eyes! Actually look into these people, this movement, what they’re doing, what exactly they’re teaching! I have no hate for someone that’s chosen a homosexual relationship, just like I've got no hate for someone choosing to smoke or shoot heroine. But when it goes from "in the bedroom" to in the classroom, in the court room (silencing the opposition) and in the streets, that's where I draw the line. What good is it trying to prevent the world from imploding because of terrorism, the economic crises and climate change if society itself disintegrates beneath us?