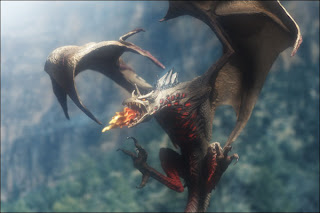 This small wyvern, one of the only members of its order found in South America, was described in 1927 by Winston Kramer. The creature lives in the lowlands of Brazil, although unconfirmed sightings have been reported as far south as Chile. Gracilipterus, meaning "slender wing," is an apt name, given the wyvern's overall small, slender build but especially in reference to the wings themselves. The arms are very thing, and the widely-spaced fingers are long and splint-like. Gracilipterus lacks a propatagium, but it makes up for this absence by way of a very flexible wrist which allows the overall plane of the hand to be nearly perpendicular to that the lower arm. At a mere five feet long, with a nine-foot wingspan, Gracilipterus is one of the smallest living wyverns. It certainly stands out in its forest home with a grey-to-black body and red spots on the neck leading to a red chest. Uniquely, this wyvern's neck is adorned with dorsal spines, although the spines do not have bony cores. Instead, they seem to be made of flexible cartilage and dermal tissue. They can be folded back against each other or raised straight up. Adams (1967) suggested that the spines were used in courtship or threat displays.
Aside from its miniscule size, Gracilipterus is not far removed from the typical wyvern bauplan. Its head is triangular and the jaws end in a small rostrum. Small cranial horns sweep back behind the orbits. The feet are functionally tridactyl, but a prominant reversed hallux is present and is used, like most wyverns, to get a better grip on the substrate. In Gracilipterus' case, that substrate is tree branches. It is surprisingly capable in the jungle canopies, leaping and parachuting from branch to branch, and dive-bombing small vertebrates, toes outstretched--ready to grab the target in a second. In fact, Kramer rarely saw any Gracilipterus individuals on or near ground-level. Hicks (1982) would later relay that, in fact, Gracilipterus spend a large amount of time near the ground, where larger-bodied prey items could be caught. In one instance, Hicks witnessed three wyverns consuming a large boar, which he assumed had been killed by the group. While grounded, Gracilipterus lopes about awkwardly, in what Hicks described as "knuckle-walking, but more like a bat than any gorilla." He determined that, given their slow movement on the ground, the wyverns must have attacked the boar from above.
While not the first wyvern to display fire-breathing, Gracilipterus was the first wyvern studied in hopes of explaining this odd phenomenon (thus the species name). Arsenault (1944) described the "fire-breathing apparatus" of a dead wyvern, determining that large chemical glands existed on either side of the wyvern's tongue, wedged in a depression of the mandible. The glands, when compressed, would each squirt a chemical compound diagonally at such an angle that the two unique compounds would collide in mid-air about six inches in front of the dragon's mouth, at which point the chemicals would ignite. As neither compound was itself flammable, the resulting fire could not travel back down either stream, thus the wyvern did not risk burning its mouth. Bizarrely, the chemical makeup of either stream has not been analyzed to this day.
Gracilipterus pyros is placed in its own family, the Gracilipteridae, which does not have any other living members. However, the fossil record of the family is quite robust. A partial skeleton of Graciliwyvern lewins (Dawson, 1955) from the Miocene of Paraguay. Another fossil form, Lagopterus isopus (Dawson & Clarke, 1973), hails from Panama and may be from the Oligocene, suggesting that the Gracilipteridae is older than most other living clades. Only the Gigantowyvernidae may be more ancient. The unique manual anatomy of the group separates it from all others, but pedal morphology suggests a kinship with the Wyvernidae.
References:
Kramer, W. (1927). A small Brazilian wyvern. There be Dragons 12: 213-225.
Hicks, A. (1982). Feeding strategies of Gracilipterus pyros (Kramer 1927). Natura Historia 391: 333-41.
Arsenault, J. J. (1944). A chemical component for the fire-breath of Wyvernia. European Journal of Draconology 34(1): 92-104.
Dawson, R. L. (1955). Graciliwyvern lewins, a new Miocene relative of the modern Gracilipterus pyros. Draconium 19: 33-45.
Dawson, R. L. & Clarke, A. C. (1973). A fossil wyvern from Panama. Draconium 37: 245-251.
Next Up: Deinowyvern, a giant monster of a wyvern from Central America!
Posted by Zach at 1:03 PM