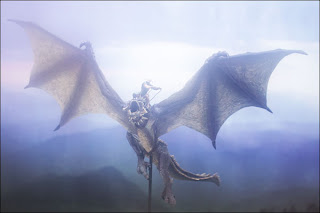 You would think that the world's largest living wyvern would be easier to find, but it's not. It was "discovered" quite by accident, flying over the Panama Canal in 1925. Since then, sightings have been brief and rare. Draconologists are unsure where, exactly, such a beast would hide, but most accounts would have you believe that it makes its home in the mountains of the Sierra Madre. Indeed, most sightings are from Guatemala and Honduras. Calvin (1945) attempted the first scientific description of Deinowyvern enigmatus based on a bevvy of interviews. He characterized the monster as having "a wingspan exceeding 100 feet," and "massive hindlimb talons for tearing prey assunder." Most (but not all) interviewees made mention of large bull horns on the head. The exact number of wing fingers varied between interviewees, from three to five. Calvin's necessarily short description concluded that Deinowyvern enigmatus was a "holdover from some mythical time in the past when giants ruled the Earth, perhaps making meals of humanity's greatest natural predators including saber-tooth cats, mammoths, and bears." If nothing else, Calvin seems to have had a flair for the dramatic.


It would be another 25 years before science was presented with a more factual description, based on a corpse, by Reed (1970). The specimen in question had been found on a beach in Costa Rica and immediately quarantined. And while not quite as awe-inspiring as Calvin's monster, Deinowyvern has proven to be every bit as fascinating. Reed's Deinowyvern had an eighty-five-foot wingspan (larger than Europe's massive Megalodracos), and a nose-to-tail length of forty-four feet. The wings, aside from being long, were surprisingly broad and supported by three massive fingers. Like most wyverns and dragons, the thumb was free of the patagium and featured an oversized claw. The animal's tail is long and fairly inflexible. It is topped by three rows of keratinous spines. Deinowyvern's torso is narrow but extremely deep, and the chest is covered in large overlapping scales. Reed found the beast's head to be most peculiar. He noted that it seems to share features with Africa's Tauropesa ungulatus including a squared muzzle, external fleshy nares, and the anteriorly-directed, curved "bull" horns. Also like Tauropesa, Deinowyvern has a sizeable "chin."

Odd for a wyvern, Deinowyvern exhibits a true tridactyl foot and a hallux which is only partially reversed. The two forward-pointing toes are large and broad, while the hallux toes point inward, toward each other. Reed was struck with the contradictory nature of the foot: While the reduction in toe number is a derived trait for the Wyvernia, the lack of a fully-reversed hallux is quite primitive, and in fact missing entirely from central Africa's Eowyvern. "Whether at some point the perching toe was lost, or it had simply not formed yet," he wrote, "I am unable to say." He also noticed that, with just four wing fingers, Deinowyvern was more derived in the structure of the hand than most other wyverns, which retain all five wing-fingers.

Deinowyvern's range has been nominally estimated to run the distance of southern Mexico to Costa Rica by Mandelbaum (1992) in his review of extent wyvern species' ranges. His estimate was based on reported sightings and physical evidence in the form of shed teeth and scales. A few sightings in Jamaica since then suggests that Deinowyvern is able to frequent great distances overseas, perhaps in an effort to find food. Despite its enormous range, the enormous wyvern's main population seems concentrated in the Sierra Madre mountains, as the vast majority of sightings still occur in and around them.

Although frustratingly secretive, Reed's corpse was able to provide Mantell (2001) with some idea as to the creature's taxonomic significance. Given the monster's size, he placed it in a family previously occupied by the large North American fossil form Gigantowyvern dawsonii (Brahe, 1987), the Gigantowyvernidae. Frustratingly, the foot skeleton of G. dawsonii is unknown, so Reed's musings about the animal's derivity are still unknown. However, Mantell suggested that the Deinowyvernidae is a derived family, and that its closest living relative may be Caprawyvern mencotti from the American southwest. Mantell cautioned that the two groups probably split sometime in the Miocene, and that Caprawyvern is the odd duck in its family. The suggestion that the Gigantowyvernidae and the Ceratowyvernidae share a common ancestor is based mostly on fossil forms from the latter group.

Coming Up: The most aggressive wyvern on record just happens to be suspected of erroneously starting the myth of the European dragon!
Posted by Zach at 10:22 PM

Awesome. I found this one informative, yet stimulating!

One question: Are we going to do some of the cretaceous-era birds like Icthyornis (sp?) or Alexornis? How about Ornithilestes? I am willing to take on those ones if necessary.

Probably no birds, Raven. Well, actually, if you could whip up a small raven sketch for the dinosaur panel, that would work.

Hell, we have to have a conference call to finalize the taxa list with Scott. You might expect a call today, in fact...