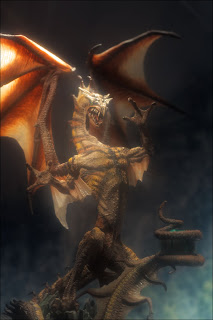 Described by Clarke in 1934, Chasmodracos bentoni has proven to be one of the most unique dragons alive today. Found along the coastal areas of southern Europe from France to Italy, Chasmodracos is a cave-dweller, and while not a swimmer by any means, the dragon is often seen wading in the salt water, looking for food or collectibles. The dragon is mostly yellowish-brown, with darker stripes here and there. L-shaped spines run down the animal's neck, back, and tail. These spines are often connected by a thin dermal membrane. The ridiculously long tail is prehensile and features larger spines which are always connected by a skin membrane. Clarke called them "fins" and likened them to the fins of Palusodracos, although a close relationship between the two is unlikely. Chasmodracos stands erect, bipedally, on large four-toed feet. It's body is wide at the ribcage and narrows toward the hips. The forelimbs are short, and end in tridactyl hands. The hands are not especially good at grasping objects, which may explain the prehensile tail (Morris & Bay, 1953). The animal's head sits on a sinuous neck and is relatively small and flat-topped, with bony "eyebrow" horns and small, laterally-directed eyes. The wings are small but wide, and while it doesn't take to the air often, Chasmodracos is capable of short bursts of flight. Like Eudracos lacerta, the first phalanx is unconnected to the cheiropatagia and retains an enlarged, hook-like claw. This is a small dragon--merely nine feet long, with a 16-foot wingspan.

Chasmodracos is extremely unusual in its feeding and collecting behaviors. Each dragon keeps a separate cave, although mated pairs may share one, should it be large enough. Dragons decorate their caverns with floatsome and jetsome that they find while looking for food, and they often carry their findings with their tails. They especially like shiny objects or brightly-colored stones, but really, all kinds of junk are fair game for Chasmodracos. Caves have been found with pieces of shipwreck, clothing, bottles, and bones in them. These trinkets seem to mark the dragon's territory, although they don't seem to have anything to do with courtship. Wilkes (1987) noted that many dragons will swap out new items for older ones once their lairs become too full. "Exactly how the dragons determine that their caverns are 'at capacity' is unknown," he wrote, "and furthermore seems to differ from individual to individual." Wilkes also found some dragons with extremely narrow interests. One cave he found held nothing but large pieces of wood, while another cave was filled with with seaweed and dead corals.

Chasmodracos does most of its beach-combing while looking for its favorite food--soft-bodied things like octopi, starfish, and sea cucumbers. It will also eat crabs, but to do so the dragon must take its crustacean prey back land and smash its body against a rock to kill it and break the shell. The dragons do not care for leathery starfish. Octopi present a challenge to the dragons as they are slippery and can fit through tight spaces. They often escape a dragon's grasp until the reptile snatches the octopus up in its mouth and punctures the mantle. Chasmodracos will also opportunistically go after fish, although it success rate seems rare. Juvenile dragons have proportionatelly larger wings than their parents, and take to the skies more often. Their range is wider, and they will hunt terrestrial prey (Booth, 2000). Around the age of two, however, the dragons begin losing the ability and will to fly, and will begin actively searching for a cave to live in.

Mooney (1962) suggested that the ancestors of Chasmodracos were active arial predators who were pushed to coastline environments by human expansion or pressure from other inland dragon groups like Eudracos. Further, he noted that the smaller wings of adults suggested that Chasmodracos was in the process of becoming secondarily flightless. He wondered whether, in another million years, Chasmodracos would go the way of Argos and become a seagoing dragon. "Every marine vertebrate started out on the coastline," he wrote, "and Chasmodracos may be indicative of how dragons initially invaded the sea." This hypothesis has been upheld by Irwin & Jones (1978), Irwin (1996), and Larter (2005). Taxonomically, Chasmodracos has traditionally been allied with, but not within, the Eudracocidae. Irwin & Jones suggested that the wing structure, manus and pes morphology, and caudal vertebrae were similar to Eudracos, although they noted that the sinuous overall build, small head, and L-shaped back spines were probably plesiomorphic features for a larger group, which they called Eudracomorpha. Irwin (1996) would later write that while Chasmodracos lacked many derived features which link Eudracos and Megalodracos in the Eudracocidae, there was still evidence to suggest a close relationship. Specifically, Irwin noted that juvenile animals behave and look more similar to European dragons than adults do.

Yay! I was hoping to see this little guy! Well done, sir. How does it react amongst humans?! Does it kill on sight? Does it RUN??!