I Have Nooooo Idea 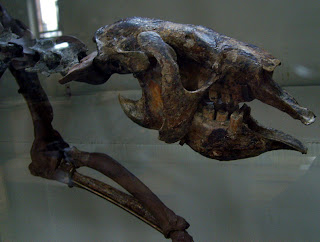 Have you ever sat down to write something, and it just turned into something completely different? This is one of those times.
The Story of Thalassocnus

One dreadfully hot Thursday, back in the Miocene, a ground sloth stared out into the endless blue ocean and thought to himself “Blorf,” which means (roughly translated):

“It looks so nice out there…peaceful. It’s so dreadfully hot. And that’s clearly where all this yummy seaweed is coming from, so maybe I should go out there and find my own plants without all this crappy sand.”

So the ground sloth took a swim one day. He swam out as far as he could go. His heavy hair made the journey exhausting, but the sloth was cool and happy. The long swim made him hungry, so the sloth dove underwater and tried to look around but he found that the salt water stung his eyes…He grubbed around on the rocky bottom, more through feeling than seeing, and tried nipping at various things. Fish swam away, coral didn’t taste good, and the plants were also full of sand! Then, in an instant, the sloth was eaten by a shark. Bit right in half, in fact. Fish and invertebrates spent the next few days scavenging his corpse.

The sloth’s remains washed up on that same beach the following Tuesday. His friends didn’t discover the rotting half-carcass until Friday, as they had traveled to the beach to look for seashells and skip stones. Though saddened and alarmed, none of the sloths in the community were particularly surprised that the sloth was dead, mostly because they hadn’t seen him in awhile, but also because the sloth had been spouting weird nonsense like “yornk yornk hazoo,” which means (roughly translated):

“The end is nigh! Repent sinners!”

None of the other sloths knew want “sinners” meant. They’d figured it was just a phase. Still, the entire sloth community was puzzled by their strange friend’s remains. They all assumed that some predator—possibly one of those irritating cats—had attacked and killed the sloth and then either covered his remains with seashells and coral OR thrown him headlong into the ocean after dealing the deathblow in an effort to hide the carcass from another predator, or possibly an owl.

Most of the sloths accepted one or both theories, but a group of three sloths decided to search out more evidence. The elder sloths warned against swimming out into the oceans, and they raised several good points: Sloths didn’t know how to swim; you never know what’s hidden under the waves; and seriously, have you ever even crossed a river? But the elder sloths were old and senile. Why, just last week, two of them wandered off in to an ice cream shop that had closed down like twenty years ago and their families had to drop everything and wandered around looking for them for like two days. Goddamn elder sloths. So anyway, several sloths swam out to sea, convinced that their dead friend’s remains were somewhere out there and would tell them not only the method of death, but also the identity of the cat that killed him.

Three of the sloths were also eaten by sharks, but one made it back alive. He didn’t have as much hair as his compatriots, and so was not as weighed down. As remains of the other three washed up, more investigations were held (sloths are very particular), and this hilarious, though tragic, scenario repeated for several months. On the upside, it was a very good year for sharks. Eventually, the only sloths that were left were the freaks that could at least swim to and from the crime scene. Their investigations concluded that sharks were the culprits in almost all cases, save for the cat who doubtlessly murdered the original sloth before trying to hide the remains below a blanket of crustaceans, seaweed, and bits of coral. The twelve remaining sloths were all deformed in different ways: one was hairless, a few just had very short hair, one had webbed feet and hands, and one was unusually skilled with a harpoon which had fashioned, ironically, from the bones of the original washed-up sloth.

These weirdo sloths, free of oppression from the “normals” of their society, formed a new government based around living in and around the sea, a place where their deformations were celebrated instead of looked down upon. The sloths decreed that the only allowable land-based activities involved sleeping, shagging, and playing charades, which the sloths found difficult underwater. Within just a few years, the sloths had procreated and their children were also happily frolicking in the waves. Their children had an even easier time navigating the sea than their parents did, since so many of the unfortunate deformities had begun adding up in individual children. One of the young sloths was especially adept underwater: he was hairless, had webbed feet and hands, and had developed an unusually long snout which he used to grub around in crevices for food. Not even his mother could look at him straight, but the founding sloths knew that in just a few generations, their entire race may very well look something like that hideous freak. One group of young sloths invented water polo while others began building impressive structures with volcanic rocks and seaweed. Near-shore environments were preferred, as the sloths were quick to notice that anybody who ventured into the darker waters beyond the continental shelf were usually eaten by sharks (or, as sloth legend has it, semi-aquatic cats).

In time, the sloths began basing their society around the sport of water polo. They fashioned balls out of coconut shells and built surprisingly sturdy nets out of seaweed and vines the jungle. As sloth society grew, so too did the number of teams who competed in regional water polo matches. Unfortunately, sloths were pretty unimaginative, and team names tended to blur together: “The Fightin’ Sloths,” “Seasloths,” and “The Fightin’ Seasloths” were all legitimate teams. Adding home-base monikers did little to help. “The Fightin’ Sloths” soon became the “Big Piece of Rock Out by the Pink Coral Reef Fightin’ Sloths.” Not surprisingly, early experiments with announcers and color commentators failed spectacularly.
As the millennia passed, sloth scientists began predicting that ocean levels would drop significantly as the planet became cooler. They suggested that water would actually freeze and that, because of this “freezing” effect, the amount of available liquid water in the oceans would drop, and thus the oceans would recede, and sloth society would be in terrible danger. If the water levels dropped below the continental shelf, the sloths would either have to figure out how to protect themselves against the now largely-mythical sharks or return to life on land. The majority of sloths didn’t find either alternative appetizing, and chose instead to argue about illegal pinniped immigrants and whether or not their sloth king was actually born on the beach. It is generally believed that this useless bellyaching proved the downfall of the marine sloth, which scientists now know as Thalassocnus.
Posted by Zach at 2:21 PM

Um, okay. I'm sure most sloths are good swimmers. (-Is missing the point entirely-)

This is a thing of beauty.