I don't know if you've all heard, but the TMNT are making a fanservice comeback with a direct-to-DVD movie called Teenage Mutant Ninja Turtles: Forever in which the 80's animated turtles team up with the turtles of the current animated series. Hijinks ensue. Watch a nostalgia-filled clip at Topless Robot, my source for all things nerdcore. You'll notice, perhaps right away, that Leonardo didn't sound anything like that in the original 80's cartoon. He now sounds black, but in a cheap James Earl Jones way. Also of note: April O'Neil's surprisingly robust bra, which is valiently holding up some gargantuan breasts. If you go back and watch the original 80's show before it got tossed to CBS and got all Bruce Timm-ified, especially the first four episodes, you'll see that, in fact, April's bizarrely large boobs are not new, but an honest-to-god holdover from the 80's cartoon. She even has cleavage in a few episodes. That shit wouldn't fly today.

In fact, April herself has become more and more vanilla in animation with the steadfast march of time. Consider: 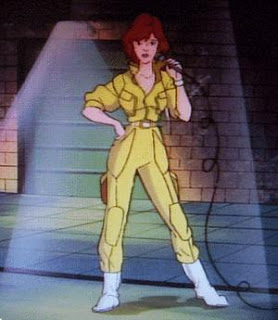 April O'Neil, circa mid-1980's. Stupid yellow jumpsuit: Check. Reporter for Channel 6 news: Check. Roommate named Irma who's a blatant ripoff of Annie Potts' character from Ghostbusters but not as sarcastic and more bubbleheaded: Check. Combative skills: Uncheck. Rescued by the turtles basically every episode because of that: Check. April was kind of a loveable character in the 80's series. One could argue that she and Splinter were the only level-headed characters on the entire show. Yeah, she got kidnapped a lot, but that was often because of her dedication to "getting the story" and winning a Pulitzer or something. After the show went all "dark" on CBS, April wasn't kidnapped as much and finally changed her wardrobe to something a little less leisure-suitish. 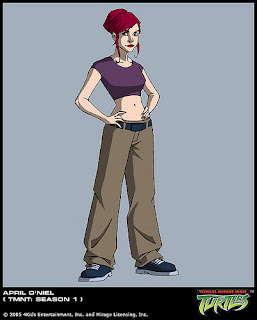 You might not recognize this as April O'Neil, and I wouldn't blame you if you didn't. This is her 2003 animated series avatar, and she now looks stupid. She's gone from being a curvy brunette to a straight-up-and-down redhead with horrible fashion sense and the inability to wear eye-catching colors. She manages an antique shop and used to work for Baxter Stockman, which is more in line with the original Mirage series, so that's...good. I guess. It's just that the character is GONE. I've seen the 2003 series and man, it's closer to the original comic, sure, but it really lacks heart. April is a space-filler, and doesn't contribute in any meaningful way to the storylines. She doesn't usually show up at all. Also, notice that her rack has been downplayed significantly. I blame oversensitive networks. If it was an actual character design choice, then I'm all for it, but the cynic in me thinks that Fox was scared of offended parents or advertisers, as so often happens these days. Was this just not an issue in 1987? 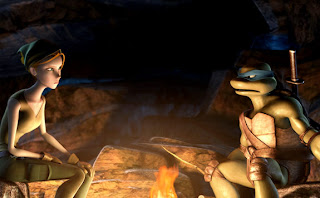 Am I the only one who LIKED the 2007 CGI movie? I might be. But as I've said before on this blog, the TMNT work on a very limited bandwidth for me, and I think the stories work best when dealing with the group as a coherent unit, or a family. Shredder is overused (god, they keep bringing him back in the animated series), and the science fiction crap doesn't really gel with my "vision" for the Turtles. These are real characters. Triceratons are great, but I don't think they belong in New York City. Sorry, Mirage. Anyway, April was portrayed well (initially) in the CGI film. I think she was back to being a reporter? It was never really clear. 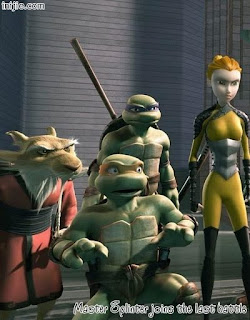 But then, suddenly and without warning, she's a NINJA. With mad skillz on par with the Turtles. I think Splinter was teaching her on the side? Again, it's never really clear. And her costume is ridiculous. Its blinding yellow hue may be an homage to her 80's counterpart, but I think it's probably more of an homage to Kill Bill, given that she also wields a katana. This was a shameful, shameful turn for the character. Yeah, it's empowering and all that jazz, but April is a totally different entity now. It would be like Samus Aran giving up bounty hunting and becoming a galactic insurance salesman. This is what April looks like now, on the current season of the animated series. She's getting married to Casey Jones, which is nice. She looks like her CGI counterpart, which I'm sure is intentional. I like the fact that she looks like a girl instead of a punk kid. I haven't been keeping up with the last few seasons of the show, but I hear she's still a ninja. Poor girl needs to each a sammich, though. Maybe you just can't put breasts on animated characters anymore? Excuse me while I completely lose interest in American animated kids shows (this probably should have happened around the time Powerpuff Girls became popular). By the way, I think the 4th season of The Venture Bros. started at midnight last night/this morning. Now there's a good animated show...of course, it's not really for kids.

Well, that was interesting. No matter what horrible design derailings happen to April O'Neil, though, nothing can beat this little gem from The Next Mutation: 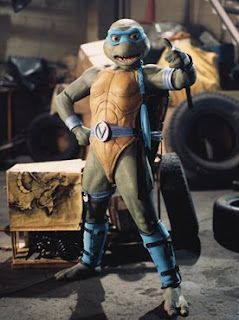 MY EYES! THE GOGGLES DO NOTHING!

Postscripto: Is it wierd that I love the TMNT, but hate the vast majority of comics/films/shows that portray them? There are a few really standout examples of what I think works for the turtles, but it's not even IN any of the Mirage books (especially the current one). I think the later volumes of the Archie Adventure Series nailed my turtle vibe pretty well, and bits and pieces of the Image series. The latter is almost universally reviled by other turtle fans. I also hate Jim Lawson's "art" with a passion, but he is generally considered "the" TMNT artist. So I love the characters, but hate almost everything they're featured in. This seems like a paradox.
Posted by Zach at 12:18 PM

Oh my god. What is seen cannot be unseen! It being an anime, though, I imagine that our dear Channel 6 Evening News Hour reporter was spectacularly-endowed here. *lol*

But dang, that show looks wierd and crappy. The wierdest thing to me is that the "normal" versions of the main characters look just like the American 80's counterparts. Then they go all Henshin Cyborg and things quickly fall apart.

I used to love the Turtles, but I knew them as 'Teenage Mutant Hero Turtles' rather than '...Ninja Turtles'. I used to think they were real and thought they would bring me presents at Christmas instead of Santa. Thanks for reminding me about April and Irma, I had forgotten about them!

Ah, yes. The infamous Anime Ninja Turtles. I still can't tell if that's for reals or some kind of elaborate satire. (And then, there's "The Saban Nightmare"...)

In the fourth picture, IS that Splinter? Or is it a weird Anthro version of Falkor from "Neverending Story"?

And in the last picture... Holy. Crap. I get that the Turtles are basically half-human but... how in the %$#& are human breasts under a turtle's plastron supposed to even work?!?

DEAR GODS WHAT WAS THAT. o_o

No, I do not think that weird. I'm a big Bionicle fan, but if I ever met Greg Farshety (the writer), I'd probably punch him in the face for horrible writing.

"under a turtle's plastron supposed to even work?!?"

Nonfunctional mutation that leads to detrimental effects in the subject, perhaps due to mammalian genetics added with a significant dose of estrogen? Of course this is just a guess.

If anything, it should be the male turtles who have the "brests under the plastron look", given how in most male turtles the plastron is curved to allow them to hang onto the female. Don't think too hard about it or...ow...my eyes.

Did you actually watch O3 series? That version of April contributed heck of a lot more than the 87 April. I'm not trying to bash "classic" April but the only thing she seemed good for was getting kidnapped. But at her defense if it wasn't her was getting into trouble the Turtles probably wouldn't have has many adventures since most of it revolved around saving April. 03 April on the hand used her skills as a computer scientist to help the Turtles on their many adventures. And her intellect and survivor instincts is usually the key to their victory. I don't believe I can say the same for 87's April. And yes I'm afraid you're one of the few that liked the 07 film. Don't get me wrong it wastn't bad but it was much too flawed to find engaging. It probably would have been better if they had used the Shredder or some other established villain like Rat King or Stockman. Anyway, 03 April trumps the 87 April. She is smarter, more down to Earth, and more well rounded character than the classic April.