An American Paleoartist in London: The Next Day 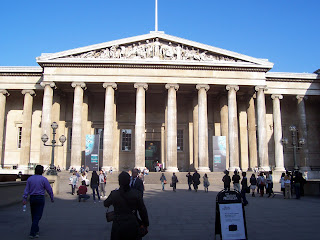 Today was actually a lot of fun, maybe the most fun day we've had so far. In the morning, we headed to the British Museum, which was pretty incredible. The Egyptian rooms in particular were beyond amazing. We were both hoping that the Great Wave painting would be there, but it was being rotated. Curses! But hey, it's tough not to be totally impressed by the Parthenon room. My gosh. My gosh! We stayed there for a very long time, just wandering around and being in awe. Sadly, the museum filled up very quickly, and before too long it was shoulder-to-shoulder. After leaving, we ate lunch and headed to Victoria Station to get tickets to Bromley South (just 10 pounds for both of us!) to see Down House. Getting around Kent was kind of awkward--bus tickets cost 2 pounds apiece, and Gina thought we only had 3 points on the back. Thankfully, she found another pound in her coin purse, and we are officially out of cash and coins! 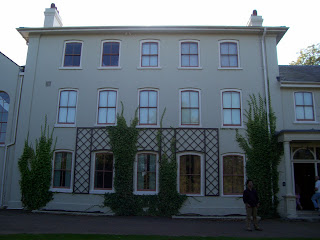 Down House was incredible, but I was disappointed that it had become so museum-ee. The Heritage Society clearly rebuilt the whole place, adding signs and glass displays. The most impressive rooms were those that remained unchanged with a red velvet rope keeping people away, precisely because they were unchanged! On the trip back, I suddenly realized I was dead tired, and almost fell asleep on the train. There was a very busty girl who was almost falling out of her top, though, so I had to keep one eye open. LOL! Even Gina was impressed! When we got back, we weren't out of the woods yet. We weren't impressed by the food court at Victoria this time, and walked back to the hotel, only to leave again in pursuit of food. Food was incredibly hard to find! I guess London closes at 7 p.m. on Sundays, because virtually every restaurant was closed. Eventually, we just got sick of walking and settled for Subway. But there was an interesting note on the door--their credit card machine was broken! Oh, damn you, Subway! Right then and there, I converted to the Church of Tesco, and found myself enjoying a Sandwich In a Box and a Coke! Currently, we're watching "The X-Factor." It's much better than American's version of the show (American Idol? America's Got Talent?). We keep hoping to come across Jeeves & Wooster, but I don't think it's on tonight.
Posted by Zach at 12:40 PM

I don't think I've ever seen J&W on TV. You'd be extremely lucky to find it on 'terrestrial' TV, let alone on the 'freeview' or satellite channels.