Just to be absolutely clear, Jack Thompson did not try to crucify Dead or Alive Xtreme Beach Volleyball (which has since spawned a cheesecakeer sequel, DoAX2). While this screenshot is from the Xbox 360 sequel, it is diagnostic of the original game as well. 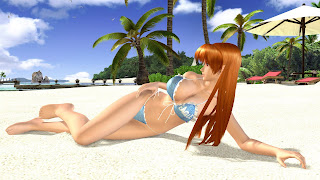 Instead, he focused his laser-like hate beam at Grand Theft Auto: San Andreas, a game that looks unbelievably ugly even though it's a late-era PS2 game. Usually, the best-looking games come out late in a system's life (for various reasons). Rockstar did not follow this trend. 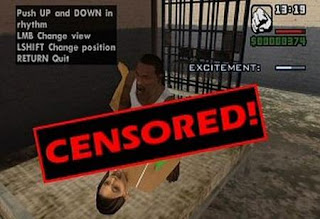 The original, uncensored screenshot is freely available online and not difficult to find. Here's the thing: If the Hot Coffee scene remained in the game, Rockstar assures us that it's not some violent rape scene--it's sex between two consenting adults (the woman is your character's girlfriend). But Rockstar thought even THAT was too much for the American market to handle, and bured the scene in the game's code, making it unaccessable to 99.9% of gamers. That 0.1% hacked the game, pulled the scene, and developed a patch that allowed other users to partake. Without Rockstar's permission.
So on the one hand, you have a game released in America that's pure and utter cheesecake, a game where chesty girls with itty bitty bikinis frolic on beaches and bounce around while playing volleyball (DoAX2 even brags about having exaggerated "breast physics," and they are). That's the entire game, out of the box, available to every user with an Xbox or Xbox 360. On the other hand, you have a consentual sex scene deleted by the developer and brought to the surface by hackers who illegally distributed a patch. What's worse? What's more damaging to "the children," who are always brought up in these stupid controversies.
Neither one is worse than the other! If anything, DoAX is worse because of the shameless objectification of women...which is yet ANOTHER topic for ANOTHER blog post. Geezus, we're getting into deeper waters here.
But I just wanted to demonstrate, even moreso, that Jack Thompson is a jackass. This was supposed to be brief.
Posted by Zach at 1:28 PM

I suspect we might disagree on the artistic merit of cheesecake, but I'll wait to see your post.

I will say that Rockstar's games appear universally artless to me.

That, combined with their mediocrity, is the reason I don't play them.

Have you seen the things I buy? I love cheesecake.

Hi Gents!
this is a controversy I won't weigh in on, since I don't know anything about it, I really don't care either I guess. The only thing my PS2 has done lately is play some movies. I wonder if it's getting bored...?
Anyway I'll stick to pen and paper and cardboard for my gaming entertainment.
How's the Show coming?
Bri.