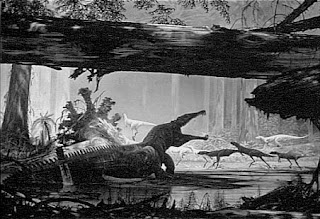 Mike Benton & Stephen Brusatte were kind enough to send me their recent Science article investigating why dinosaurs survived through to the Jurassic but not most other archosaurs. The study focuses on the 28-million year span between Carnian-Norian extinction event and the Triassic-Jurassic extinction event. As it turns out, dinosaurs weren't the only "dinosaurian" critters on the block. Poposaurs, ornithosuchids, and rauisuchids all converged to some degree with dinosaurs, none more obviously than chatterjeeids like Shuvosaurus and Effigia. Clearly, these animals were all competing for similar resources.

Brusatte, Benton, Ruta & Lloyd aim to dismiss ancient dogmas that dinosaurs were somehow "superior" to their competition, perhaps thanks to their bipedality. If this were the case, we'd assume that dinosaurs arose quickly, but that's not how it went down. Sauropodmorphs diversified during the Late Triassic, but theropods and ornithischians didn't really take off until the Jurassic period, when competing low-browsers and carnivores conveniently went extinct.
As it turns out, ornithodirs and crurotarsans had virtually identical rates of evolutionary change. Despite that, crurotarsan groups (like phytosaurs, poposaurs, rauischids, etc.) were more common and in virtually all cases, much larger than their dinosaurian neighbors.

So what happened? How did dinosaurs survive through the TJEE while neighboring families, often of similar body types, die out? There may not be a clear-cut answer, but Brusatte, et al. chalk it up to chance. Perhaps during the aftermath of whatever led to the great dying, dinosaurs had some advantage that we can't understand right now.

For me, bad luck is a great explaination. Look at the end-Permian extinction. Virtually every dicynodont that wasn't called Lystrosaurus bought the farm, and there's no reason why that pig-lizard should've survived while its brethren burned. Lystrosaurus was no more "evolved" than its cousins. It was sheer luck that propelled the little bastard through the hard times. Maybe they bred like rabbits, which would also explain their subsequent global domination...Likewise, why should Coelophysis live while Marasuchus and Effigia succumb? All three were fully bipedal and fast-moving. Maybe Effigia's herbivorous diet limited its resources during the aftermath. Maybe Marasuchus didn't breed fast enough.

Maybe in the Roll for Inititative, Coelophysis and its cousins rolled 20's.
Posted by Zach at 5:21 PM

I'm guessing that mass extinctions trigger a lot of the faunal replacements over the millenia. I'm of the mindset that says environment is a bigger variable than competition. Keep in mind that every species that evolves does so into its own niche. If there's a vacuum, something will fill it. Thus, you have things like niche partitioning among large carnivorous animals and big herbivores. Different prey specialities, different feeding heights, etc.