Wyverns are not Dragons 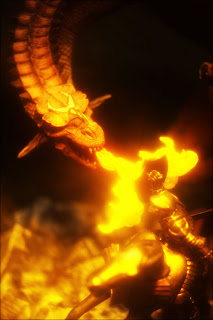 After a long hiatus from writing about dragons, I decided it was probably time to continue my discussion about large flying modern reptiles. But we're finished with the Draconia (for now), so what else is there to write about? How about wyverns? Although often mistaken for dragons, wyverns are an entirely different group of reptiles. Their poor fossil record suggests that the group evolved fairly late, perhaps originating as recently as the Miocene. Wyverns are generally larger than dragons, have more triangular skulls, can "breath" fire, but most importantly, wyverns only have two pairs of limbs.
Dragons are unique, of course, in having three functional pairs of limbs: Two sets of forelimbs and one set of hindlimbs. The upper pair of forelimbs have been modified into large wings, but they retain (in most cases) the same general structure as the unmodified forelimb. Wyverns, however, took the bat route: they modified their only pair of forelimbs into enormous wings by way of elongating (and strengthening) the individual fingers. Wyverns are more widespread than dragons, occupying the North and South America. They also have a strong presence in Africa and Australia. The largest and heaviest flying vertebrates to ever live are wyverns, and exactly how they manage to take flight while being so bulky is one of the great mysteries of evolution. Wyverns do not have the tendancy to abandon flight that dragons do, although this probably has to do with the inability to depend on a second pair of arms. Wyverns are a fascinating group, and I look forward to discussing them in the coming days (and weeks).
Posted by Zach at 12:18 PM

Thanks for the information. I could not find eney info on them because they are my favorite mythical creatures. My email is darkwolf0791 give me more info later.:)