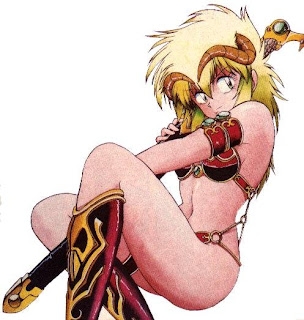 Our journey begins with an excellent manga series by Johji Manabe called "Outlanders." Back when I was a freshman or sophmore in high school, I was just beginning to discover manga comics. In general, I didn't care for them. The art was, most of the time, unappealing to me. Manabe's work, however, blended more traditionally cartoony styles with ridiculously detailed background work and menacing bad guys. Although I never read the entire series, the basic plot was: Boy meets alien warrior girl whose father wants to destroy the Earth. Boy and girl try to stop evil father but fail. Earth is blown to smithereens by a Death Star-like weapon. The library's collection ends right there, so I never found out what happened after that.

Anyway, I decided right then that I really wanted to learn how to draw people (I don't know exactly why) and expand my artistic talents beyond "various members of the Dinosauria." So I set to work trying to duplicate Manabe's work but add my own take on the form, something I've been doing ever since (I call it "assimilation"). But Manabe's art didn't work on some level for me, and I began looking to other sources of inspiration. One of them was Bruce Timm. I noticed this excellent book at a bookstore one day and promptly bought it. I'd always loved the Batman Animated Series, and now I could assimilate it!
Thus, my character was named Selena Isley, a combination of Selena Kyle (Catwoman) and Pamela Isley (Poison Ivy). That remains her name to this day, but she doesn't really look like either of her namesakes. The Bruce Timm approach didn't really stick. At that point in my artistic maturation, it was almost too simple. Does that even make sense? I suppose anatomy is kind of like writing--you can't start breaking the rules until you really know them. The beautiful, simplified outline of Catwoman did not give me enough information to really build on. Thus, I virtually abandoned the Batman approach and stuck with Manabe, to questionable results: 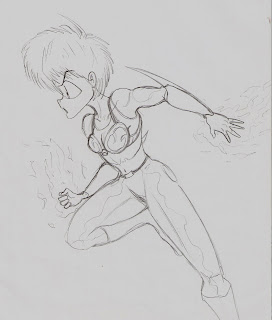 The resemblance to Outlanders is kind of painful now, but at least I tried to do my own thing with it. For one thing, Selena is wearing a tank top (or something) behind her breastplates. She's got cool gauntlets, and I have no idea to this day where those came from. Additionally, she has jeans and tall leather boots. The jean design actually comes from the awesome, but short-lived, modern Turok comic book series. Back at her inception, the idea was that Selena was sucked into an interdimentional vortex (or something) and wound up on a parallel Earth where most dinosaurs had not gone extinct and had instead evolved into essentially human roles. The dominating race was derived from Psittacosaurus. There were rock-people called the Groxen, and a bunch of aliens called the Morphae. The Morphae were trying to take over the planet, but their big roadblock was the dinosaur-people (whose name escapes me now), and Selena fulfills some prophesy of being the "chosen one" and develops psionic powers. Thus, the fire around her hands. I HAD a really freaking awesome picture of Selena (at this stage in her development) standing waist-deep in water with a green bikini, pointing at the "camera" with blue flame around her hand and saying something like "It's not polite to stare." Truly epic work, kiddies. I miss that picture, though. It was the best of her from her anime period.

And then you've got these wierd attempts to change her costume, including the Fire Emblem-inspired outfit to the left. I actually like this look more given her parallel Earth setting. Where's she going to get a breastplate and jeans? Dinosaur people don't wear jeans. They don't even know what jeans are. Another disturbing aspect of this look is that Selena doesn't really have breasts. I mean, she does, but not to the extent that she would later develop. Some part of my brain must not have switched on yet while Selena was in her manga phase.

And then there's the full catsuit, inspired (blatantly) by Samus Aran's Metroid Fusion suit with Metroid Prime Phazon Suit colors. I think. The colors may have been of my own design. I really need to play the original Metroid Prime again. God, that's a good game. Notice that the hair is changing--diagonal tendrils of hair are now framing her face. I think I got that idea from Dead or Alive 3 (this was during the launch of the Xbox, or perhaps just before it). If I recall correctly, Helena's hair is sort of like that, and I thought the "face-framing" was kind of cool. I have since abandoned the idea.

I did get a lot of good material from that era, though. I slaved over expressions for hours, but the manga style eventually began showing its limitations (for me) in that there were only so many expressions I could successfully pull off. Squinting and understated rage were beyond my abilities. And holy cow--look at that little mini-headshot in the bottom right. I was trying to develop some kind of cheat sheet for headshots. I was, and still am, obsessed with figuring out why something works. Around this point, Selena's life story began to change. 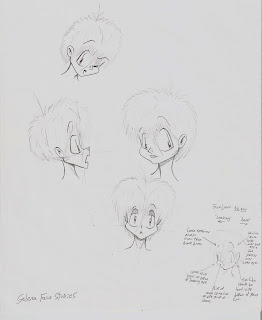 I had just seen The Matrix and I was really getting into the Silent Hill series. In what can only be described as a bizarre episode of "Will It Mix?," I slapped the two together, imagining Selena as a sort of paranormal investigator who gets stuck in an abandoned town where demonic creatures have consumed the populous and are now looking to escape their confines. I had a great opening shot worked out in my head--I may still use it (someday). The plot, though, of Selena's introductory story was boarderline idiotic, though. A maniacal cult had resurrected a bunch of demons from The Pit (as I called it) and then...are you ready for this? Genetically and mechanically manipulated them to make...super demons. I had a lot of concept art for the beasties. I think I was more interested in the creatures than the heroine. All of these critters were heavily inspired by Silent Hill, but with a disturbing cybernetic component. Anyway, Selena's head began to change, as did her outfit. She took on a blonde Lara Croft look: 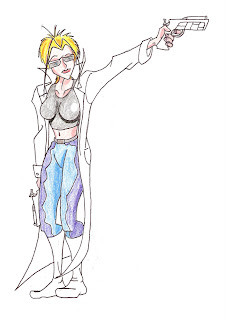 See, I kind of like this version. The hair isn't nearly as poofy, the bangs aren't spikey, and I like those cool shades. I clearly had (and have) no idea how to draw guns. Notice that while the jeans remain essentially the same, Selena has graduated to a black tank top and has gone from a B-cup to a D. I think her pointy face was just me screwing around with a different face shape. Our girl is starting to move into the modern period! The paranormal thing remained the same, and I actually dropped all of Selena's psionic tendancies in favor of straight-up run and gunning. And this is about where Selena stayed for the next few years... 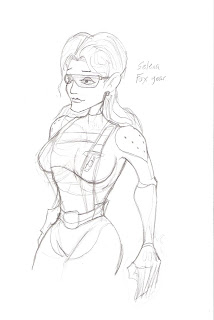 And then two things happened. First, I discovered my favorite comic artist, Frank Cho. I rapidly consumed and assimilated every piece of Cho art I could get my meaty hands on, and I actually began to understand human anatomy. Let me just say, as a brief aside, that people are ridiculously difficult to get right, and that's because our anatomy is so horrifyingly different than every other mammal on the planet. We're upright. Our backs and shoulders are wierd. Our legs attach to our bodies vertically instead of horizontally. We have waists and inward curves in our backs and...humans are nightmares to draw.

Now then, I was also playing a lot of Metal Gear Solid at the time, and I'd just finished Portable Ops, so I tried drawing a Cho-esque Selena with Big Boss' FOX gear. I actually really like this version, but it was a bear to draw, and the pencil sketch looks a lot better than the final inked version did (that's actually the case quite often). I still draw Selena like this for the most part, although from my last post, it looks like I'm experimenting with Tim Fischer's style. Selena's backstory is now somewhat in disaray, although I've always liked the paranormal investigation angle. But I like her sneaking suit, too, so maybe she could be some kind of paranormal investigation spy?

Selena is continuing to evolve, and it's absolutely maddening, but it's fun, too. Someday I'll finalize her design and come up with a competant backstory for her. But it's probably a ways off.

Ten bucks says this post won't come out right! I WIN!
Posted by Zach at 1:36 AM

"Let me just say, as a brief aside, that people are ridiculously difficult to get right, and that's because our anatomy is so horrifyingly different than every other mammal on the planet. "

I think another reason drawing humans can be so difficult, is that each and every day, we are looking with interest at each other. We are really really good at seeing what looks accurate and what doesn't.

Fantastic evolution of a character, Zach. Perhaps the final niche will involve hellasaurs...?

We may need a comics jam session or ten.