My Childhood Comes Rushing Back 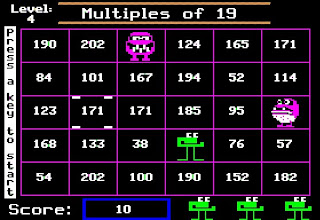 As some of you may or may not know, I homeschooled through high school because of the CF. Before starting those brain-cramp-inducing Saxon math books (curse you, Saxoooon!), the game shown above provided a good deal of my early math training. It's Number Munchers! You played as the little green Muncher, and ate specific numbers which matched the condition at the top of the screen. Eat the wrong number and you lose a life. Also, there were Troggles--evil little beasties that would wander onto the screen and wander around, trying to eat you. Several breeds of Troggle existed, but they were all annoying. In the awesome sequel to Number Munchers, adequately titled Super Number Munchers, eating enough right answers would turn you into a golden, caped Muncher capable of destroying Troggles.

I mean, look at that graphical leap!

Other old computer games I recall fondly: Think Quick! (Apple II), Operation Neptune (Windows), The Lost Mind of Dr. Brain (Windows), Shivers (Windows), and of course, Myst (Windows). There was also a game I had for the Apple II involving a slow-moving purple robot moving through an environment, looking for robot parts and traveling on a raft. Any guesses as to the title of that particular game?
Posted by Zach at 5:02 PM

Okay...I just had a flashback. Where can you get Number Munchers these days? And Oregon Trail????

I loved the Myst games...played them all, except for the last one, which I bought, but the discs got warped. *sigh*