A Few of My Favorite Games: Addendum 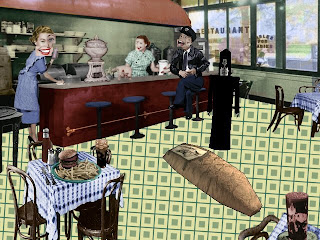 Grim Fandango (PC)
How could I forget about the one computer game I enjoy playing? Grim Fandango is a wonderful film noir about travel agent Manuel "Manny" Calavera, as he tracks down his love (and lost client) Mercedes Colomar through the Land of the Dead. Durings his journey, Manny discovers a sinister plot by a ganster, Hecter LeMans, to steal the golden tickets to the Number 9 train to paradise, which shortens a nine-year journey through the underworld to merely nine minutes. The game is artistically brilliant, combining Aztek imagery, character designs inspired by Mexico's "Day of the Dead," and plenty of classic noir plot elements, as well as plenty of humor. The vistas which Manny finds himself traveling through are all gorgeous and eye-popping (despite being pre-rendered), and the character designs are at once silly and wonderful. The screenshot above is the only time Manny travels into the Land of the Living (he's there to collect a soul), so you can get some idea of the wierd art style the game employs. As an adventure game (one of the last of its breed), Manny has no weapons and no real actions. He employs specific items to solve puzzles, and spends a good amount of time chatting with NPC's. You can learn a lot about the game's development on its Wikipedia page. The game is rare today, but if you ever find a copy, you should definately pick it up. 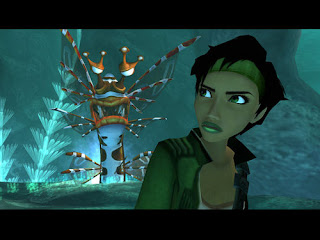 Beyond Good & Evil (GC, PS2, Xbox, PC)
How could I forget about BG&E? It's a brilliant, involving action adventure game from Rayman creator Michel Ancel. The man has gone on to create the much-praised video game adapation of Peter Jackson's King Kong, and the Raving Rabbids games for the Wii and PS2, but I wish he'd go back to the world of BG&E. The game takes place on another planet, Hillys, which is constantly under attack by wierd crustacian critters called the DomZ. Jade is a photojournalist who is drafted to uncover a government conspiracy involving the Hillys military and the DomZ. The gameplay is straight Zelda-style adventuring, with some twists in the form of picture-taking, stealth, and having an AI-controlled partner. What really makes BG&E stand out is that you really develop a connection with the main characters--moreso than in any other game I've played (besides Snake Eater). The graphics aren't the highest quality, although it looks darn good on the Xbox and PC, but the world Jade and her friends inhabit is funky and nuanced.

Actually, Ancel and his team are in preproduction on BG&E2, but Ubisoft (the first game's publisher) has not yet given it the green light due to low sales of the original. This is my plea to Ubisoft--keep Jade's story alive!

About Beyond Good & Evil: I agree!

That game deserved a whole lot more attention that it received. I played it again and the shock of what happened to the lighthouse hit me hard all over again. Poor lonely puppy.

In particular, I loved the mechanics of the camera. You're in the middle of a battle with a giant flying millipede, yet you're trying to get that perfect shot. Felt like photojournalism to me.