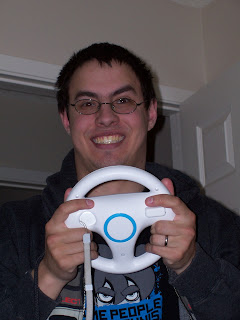 Got up at 9:30 a.m. this morning and ran to Microplay to pick up my copy of Mario Kart Wii. I'm a huge fan of the series, rubberband A.I. and cheap item tactics aside. Mario Kart Wii adds two new features to the series: the Wii Wheel and functioning online play. I apologize for the terrible picture above--I haven't showered since Friday. Notice the Penny Arcade T-shirt and Nintendo zip-up. I'm in gaming mode today.

The core gameplay of Mario Kart Wii is more similar to the SNES and N64 games than to the Double Dash mutation on the GC. In typical Nintendo fashion, many course designs have been dredged from the franchise's former permutations. You'll get new stuff like the Coconut Mall, and old timers like Ghost Valley. Having just recently played in a Double Dash tournament, it was a little odd to see GC tracks in this Wii game. And since I routinely play Mario Kart DS, seeing some of those courses in true 3D is interesting and fun. 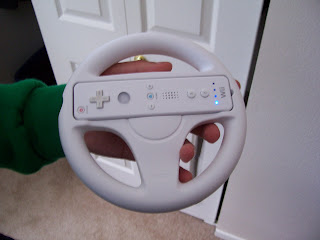 The Wii Wheel, which is bundled with the game (at no additional cost--*phew*) is, for all intents and purposes, an unnecessary peripheral. Mario Kart Wii is played with the Wii Remote turned to its side, NES-style, and if you've already played Excite Truck and/or Nitrobike, then you can, by all means, go without the Wii Wheel. Except that, honestly, the Wii Wheel adds a whole new level of immersion to the experience! The Wii Wheel feels natural and comfortable. It's certainly not huge, and the Wii Remote fits snuggly within. Should you dare to gape at the first picture again, you'll notice the giant B button on the right. That button is merely a shell which connects to the Remote's B button and allows a comfortable way to press the button while driving.

Mario Kart Wii can be played with the Wii Remote by itself or with a Nunchuck, with the Classic Controller, and with a GameCube controller, but I really have to recommend the Wii Wheel. The game was really tailored to this unique accessory, and within the first few races you'll have the control down pat. The only time the Wii Wheel screws me up is when I'm doing multiple quick drifts--the wheel will sometimes make me drift in the opposite direction of where I want to go, but I probably just haven't worked out my own kinks.

The online settup is a dream. Unlike the awful, bug-ridden pile of crap that is Super Smash Bros. Brawl's online mode, Mario Kart's actually works. You can send an invitation to somebody in your Wii's address book, and once they respond, you two can play together! Simple as that! You can also partake in worldwide tournaments and battles. Players even have "gamerscores" which go up or down depending on how well you do in these online matches.

I really can't recommend this game much higher. The usual Mario Kart complaints are still here (Blue Shells, rubberband A.I.), but the Wii Wheel and the sweet online action really make me forget about 'em. If you have a Wii, this is a great game to go with it!

have you, by chance, finished those scans, good sir?

Good Lord. It's like steering wheel with an imaginary axis!