Return of the Boneyard 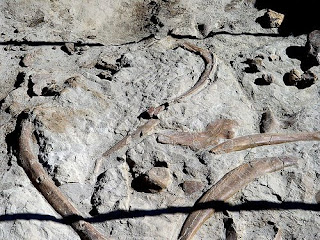 Welcome back ot the Boneyard, ladies and germs, the blogosphere's premier paleontology blog carnival. It began long long ago on Brian Switek's original Laelaps blog and moved from blog to blog until its once-predictable occurrence was rare. Well today, dear readers, we have an extra-special GIGANTIC double-issue of the Boneyard for you. Let's get right to it--cast your eyes forth at the parade of links before you, and digest the sweet, succulent information contained therein!
The biggest news in the last few months has been the discovery of "Ida," a basal primate from the Messel beds of Germany. The initial media trainwreck irritated some and provided comic fodder for others. Eventually, Brian Switek organized a carnival for for the little gal. Thanks for making this Boneyard a little easier, Brian!
From primates, we move to sauropods--those giant dinosaurs whose heads how crane ever higher thanks to those SV-POW guys. They've actually got a bunch of (what amounts to) supplementary information on their humble blog. Here's what they have to say about heads, DinoMorph, necks in living animals, more against DinoMorph, the sadness that is T.rex's neck (drink!), the implications, and of course, horizontal semicircular canals. And just in case you're wondering what Darren Naish had to say about it all, well, here you go.
Darren also recently discussed the "Birds Come First" theory of avian evolution, and why it FAILS.
Traumador, that adorable tyrannosaur, has been busy lately. He's posted a watchable blog about microfossils as well as a handy field guide to himself, terrifyingly huge monitors, obscure pterosaur Cearadactylus, one of the stranger therapsids I've run across, and finally, giant ground sloths. Talk about diversity!
Speaking of therapsids and diversity, have you seen the new Art Evolved! show about Permian synapsids! There's a secondary "example gallery" lower down. Give it a shot, you'll learn something! Nima has a great breakdown of what a synapsid is over on his blog, too. Speaking of synapsids, Bora reports on a wonderful new mammoth fossil that's been in the news. And while this isn't necessarily paleontology, John McKay details the strange case of Teutobochus. Fascinating!
And of course there's plenty of art to go around. Angie has some really beautiful work up on her blog these days: Cryolophosaurus, a wonderful CG Maiasaura, and a three-part series on a CG Parasaurolophus. Wonderful work, Angie! Can't wait to see your next Art Evolved entry, if you're doing one...Mo Hassen describes three recent creations over at his blog, as well. Finally, Dave Bressan posted some awesome pictures up at his blog that you would all do well to check out.
Have to point these out: David Hone has written two wonderful posts about those whackjobs who comment on our paleo blogs telling use that pterosaurs are lizards or birds are crurotarsians or theropods are paraphyletic or whatever. This is required reading, people! Here's his first volley, and here's the fatal blow. Absolutely wonderful posts. David's blog is just plain awesome, and if you're not reading it currently, you should.
As for me, I written very little in the past few months, but I'd like to think that what I HAVE written has been high quality (cognitive dissonance, I'm sure). Check out my post on everyone's favorite fuzzy ornithischian, Tiangulong, Puijila, and the first two parts of my Horns & Spikes series: postorbital horns and nasal horns!
I'll keep adding posts through the weekend if you folks give me the links! Hope you enjoyed this exciting edition of the Boneyard!
Posted by Zach at 8:09 PM

Woah! Thanks for all the pingbacks, Zach! As always, the boneyard is excellent.

In regards to the recent neck saga/drama, see also Kent Stevens' remarks on the DML.

Unfortunately I got a pact with the devil to see the fossils of Dr. Faust, so I hope it is not to late to submit some pictures: