All Your Boss Are Belong to Us

If you ask me (you did, didn’t you?), it’s well past the time for a new blog post. Additionally, it’s been far too long since I wrote about my favorite group of dinosaurs: the ceratopsids. This is supposed to be a paleontology-focused blog, after all. You may recall previous series on horns
‘n’ spikes (Part 1, Part 2, Part 3, Part 4), my back-and-forth with Tracy Ford (Part 1, Part 2), and my love-it-or-hate-it critique of the “Toroceratops” hypothesis (Part 1 and Part 2) (I think I’m off Denver Fowler’s Christmas card list). Let’s do something different this time: let’s just talk about the animals. So consider this post to be the beginning of series of posts about my favorite ceratopsids, period. We’ll start with my second-favorite: Pachyrhinosaurus. 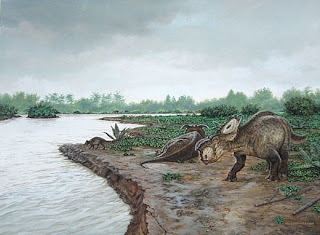 The partial, holotype skull of Pachyrhinosaurus canadensis was discovered in 1946 and named four years later by the great Charles Sternberg. He dug up a big ol’ skull that was missing the frill and rostral, and some other bits of skull from different individuals, in Alberta’s Scabby Butte formation. So different was this “thick-nosed lizard” than its horned colleagues (seeing as it lacked a horn) that Sternberg erected a new subfamily, the Pachyrhinosaurinae, to be held to the same taxonomic level as the Centrosaurinae and the Ceratopsinae (Chasmosaurinae). His life restoration, shown below, looks something like a Protoceratops with a drink coaster on its nose. More material was discovered at the nearby Little Bow River Formation, and Wann Langston, Jr. unearthed a second good skull Pachyrhinosaurus from Scabby Butte in 1955.

Langston continued working on the genus through the 1970’s, and determined that it was a member of the well-established Centrosaurinae, or short-frilled ceratopsids. Though to this day, no complete frills exist for the species, the 1955 skull does preserve some proximal aspects of the frill, and an associated bit of the parietal’s outer rim. During the 1970’s, somebody (anybody out there know?) suggested that the characteristic, though bizarre, nasal boss that defined Pachyrhinosaurus actually represented the base of a massive, broken-off nasal horn. The idea actually gained some traction, and in fact a DinoRiders toy of a particularly well-endowed Pachyrhinosaurus was produced and released to an unsuspecting public. However, the hypothesis was quickly overridden by the unfortunate fact that no Pachyrhinosaurus skulls had anything taller than a big, molar-shaped boss (and besides, the recently-described Rubeosaurus ovatus fulfilled the “giant nasal horn” dream quite nicely).

The morphology of the boss became especially clear in 1972, when Alberta school teacher Al Lakusta stumbled across a massive Pachyrhinosaurus bonebed in that province’s Pipestone Creek Formation. Dozens, if not hundreds, of individuals died there most likely due to an unfortunate river crossing. Plenty of skull material and postcranial remains gave paleontologists previously unthinkable clarity into the morphology and, importantly, ontogeny of this hornless horned dinosaur. Decades of work were put into the bonebed and, in 2008, Currie, Langston, Jr., and Tanke published the results: a new species of Pachyrhinosaurus called P. lakustai, named after the bonebed’s discoverer.

Apart from their temporal separation, P. lakustai is distinct from P. canadensis in a number of ways. The shape and structure of the nasal boss, and that boss’ relationship to the postorbital bosses, differs considerably. While P. canadensis has a molar-shaped boss that rises more or less vertically from its base, P. lakustai has a more rounded boss that tips in back and rises up from before ending in a “spout” (in some individuals) that overhangs the rostral comb. The nasal boss is clearly separated from the postorbital bosses, even in old individuals, whereas in P. canadensis, the three bosses come together late in life. As in most horned dinosaurs, however, the most telling differences are in the frill. Aside from the significant differences in P3 morphology, P. lakustai differs from P. canadensis in having a large “unicorn horn” growing from the parietal bar. This does not occur in all individuals and could be a sign of age or sex.

The growth of Pachyrhinosaurus is also bizarre. Juveniles start life with a narrow, though proportionately large, nasal horn, and small postorbital horns. As they grow, the postorbital horns are reabsorbed and the nasal horn’s base elongates (back-to-front). It assumes a pyramidal shape; then the weird stuff starts. In every other ceratopsid with a nasal horn, the horn grows more or less vertically. In Pachyrhinosaurus, that pyramidal horn grows laterally, its base becoming wider and its upper surface becoming rugose and honeycombed. With age, the boss’ structure changes further—in some individuals, it becomes concave as bone continues to be reabsorbed and remodeled. While the overall form of the parietal’s outer rim remained consistent in each example of that bone, a surprising amount of individual variation is present.

While the authors state that almost every bone in the skeleton is represented, they do not provide a description of the post-crania (I can only assume that’s being saved for a later publication). I assume it’s similar to other related centrosaurines for whom relatively complete post-crania are known (Centrosaurus comes to mind). Of course, that old generalization may not be valid—-among the chasmosaurines, Anchiceratops has very different proportions from big bruisers like Triceratops. 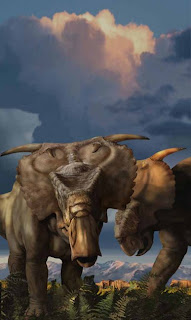 Wonderful illustration of our new Alaskan species by Karen Carr.

As it turns out, Pachyrhinosaurus is not restricted to Alberta. No, sir, this ceratopsid lived all the way up on the North Slope of Alaska. A nice, but obliquely crushed, skull was discovered up there and provisionally described for Fiorillo in 2010’s big ceratopsid volume published by Indiana University Press. There’s actually a lot more unprepared material, just sitting in field jackets, and I can’t wait for that stuff to be described. Anyway, after extensive preparation, the holotype skull was written up and awaits publication in Acta Palaeontologica Polonica (where you can read the in-press draft). The authors of that paper have given this species a distinct name: Pachyrhinosaurus perotorum. It is the northern-most ceratopsid in the world, and also the youngest occurrence of the genus. 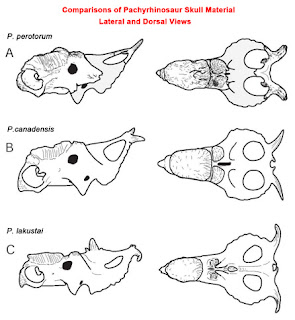 It differs from its more southerly cousins in not too many ways. In fact, it looks kind of like P. lakustai, but, again, it's the structure of the parietal that makes this guy different. The two P3 spikes are there, but this species expresses P1 spikes that grow down and overhang the parietal fenestrae, similar to the situation in Centrosaurus apertus and Centrosaurus brinkmani. This big guy would have lived in some cold temperatures in the winter--it probably got down below freezing for a few months a year, and believe it or not, the North Slope of Alaska was further north than it is today back in the Late Cretaceous, so that means even longer periods of darkness.

Exactly how Pachyrhinosaurus and its neighboring frozen north dinosaurs survived in these extreme conditions is unknown, but it certainly speaks to their hardy nature. Living alongside our boy here was a large form of Troodon formosus, good old Dromaeosaurus, Edmontosaurus, and one or possibly two tyrannosaurs--one of which was Albertasaurus.

UPDATE: I actually wrote this post a week ago, but only now found the motivation to post it. I may actually add to it later, including references. So look for that!

Good to have you back!

Nice post. Out of curiosity which is your favourite ceratopsian... I seem to recall around the time of the Ceratopsian gallery on AE you said Pachy was your fav. Is your new fav one of the many new genera to come up since then, or am I totally out to lunch on this recollection.

Anyways great post on one of my top 3 ceratopsians (I can't assign numbers. I'm just rather fond of Styracosaurus, Pachyrhinosaurus, and now Kosmoceratops... which ruins my Centrosaurine favouritism sadly)