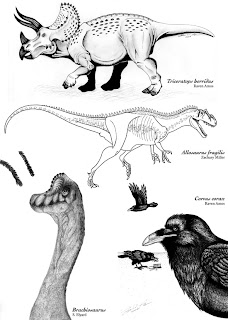 The Dinosauria
The Dinosauria is one of the most successful groups of tetrapods that ever existed. The first dinosaurs appeared during the Triassic period, some 250 million years ago, but did not rise to dominance until 20 million years later, in the Early Jurassic, after a minor extinction event wiped out the competition. With their larger archosaurian contemporaries out of the way, dinosaurs proceeded to explode in diversity. There were three main branches of the Dinosauria: Ornithischia, a group which included the armored, duckbilled, and horned forms; Sauropodmorpha, the giant long-necked animals; and Theropoda, the (mostly) carnivorous dinosaurs.
Individual dinosaur groups experienced high turnover rates until the Cretaceous period, when they diversified again, perhaps due to the appearances of early grasses and flowering plants. One group of theropods, the Maniraptora, gave rise to birds, the only dinosaur group to survive into modern times. At the end of the Late Cretaceous, 65 million years ago, a comet the size of Mt. Everest smashed into the Gulf of Mexico and blanketed the world in darkness and ash. Virtually all of the dinosaurs, as well as other large-bodied tetrapods (including marine reptiles) were annihilated. Even the prevailing group of birds, the Enantiornithines, were drowned out. Another, smaller family of birds, the Neornithines, somehow survived the fallout and diversified during the Cenozoic to include all living forms.
Artist Notes
I'm only responsible for the Allosaurus in this picture. Scott did the Brachiosaurus and Raven drew both the Triceratops and Corvus. Both of Raven's pictures are absolutely stunning. Her ornithischian has a certain William Stout quality to it, which is funny considering she doesn't know who William Stout is. Compared to the competition, I'm pretty unhappy with my contribution. It looks like a textbook drawing--the other pictures look like real animals. This is something I have to work on: giving my animals some life and personality. And context, as Scott would say. I'm also sad that my animal has pads on his left hand, but lacks pads on his right hand. I chalk it up to pathology or inattention to detail, take your pick!
Fun Facts
Why these four animals? We wanted to include a bird, an ornithischian, and a theropod. I chose Allosaurus and Triceratops because they were considered the anchor taxa before the dinosaur-bird connection was established. We were going to do a pigeon (or a dove, whatever the current saurischian anchor is), but went for the raven because Alaskans love their ravens. Also, Raven loves ravens (wonder why?). Originally, Scott was going to do the Triceratops, but we both thought that sauropods needed to be represented. The connection between sauropods and theropods isn't especially obvious to the common man, so we threw Brachiosaurus in there, too.

Zach, your work is excellent here. All the more amazing considering the crunch we were all under.

"The connection between sauropods and theropods isn't especially obvious to the common man, so we threw Brachiosaurus in there, too."

Ah. Not to take away from the late-night decisions of the designer (*cough*!), but that arrangement is almost purely accidental.

I love your line drawings though. They have a terrific simplicity and are the type I'd trust for accuracy over style.

And I just put up Euparkeria.

This leaves Desmatosuchus for me, and possibly some sort of post-mortem on the whole show might be in order.

As its instigator, I feel, well, obligated.