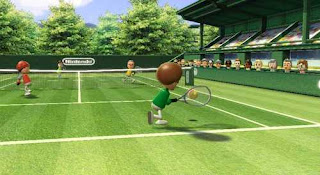 In the comments section of my last post, Sean Craven asked what kind of games he could get into as a non-gamer. This post attempts to answer that question, as I think it's a good one. Honestly, Nintendo has really cornered the non-gamer market. They have embraced this unique demographic, and the Wii is certainly the way to go for anyone looking to ease their way into gaming or just play some easy-to-enjoy video games.

The console itself will cost you $250. Sorry, no price drop in the near future. As long as the system continues to sell out the second stores get new shipments, there's no reason to lower the cost. But honestly, you get a pretty good deal. You get the system, one Wii Remote with one of the new grips and a new wrist strap, composite cords, and a copy of Wii Sports. That game is interesting for two reasons. First, it's the first time since the SNES that Nintendo has included software with a console. Second, Wii Sports not only teaches you how to use the Wii Remote, it's just a really fun game, especially for a group of people. I took my Wii down to Kansas when my wife and I visited the in-laws over Christmas last year, and we all played Wii Sports every night!

Although you can simply trade a single Remote between players for most games, you'll need two (or more) to do multiplayer versions of Tennis, Boxing, and Baseball. Luckily, Nintendo's got you covered there, too. An "expansion pack" to Wii Sports, called Wii Play, is available in a bundle with a Wii Remote. For either $40 or $50 (depending on where you go), you can get a second Remote and more games like ping-pong and Duck Hunt.

What makes these games fun and accessible is that the motions used for the games mimic real-life. None moreso than Bowling, which is the most fun game, although once you get the hang of it, Golf is a real treat, too. Playing solo allows you to do a "Body Test" in which you are given an age based on how well you perform in different short games. Over time, your score decrease dramatically (which is good)! So a Wii plus Wii Play will run you about $300. That's less than the cost of a new PS3, and less than the cost of an Xbox 360 Arcade set plus one game. And if you want to get to the gym but are unable to find the time, Wii Fit may be the answer.

Here's a review. It's a pretty fun game--I still use it today. If you get comfortable with the motions in Wii Sports and Wii Play, your next step up may be Super Mario Galaxy or Mario Kart Wii, both of which use the Wii Remote's motion functions to affect gameplay. Mario Kart Wii is bundled with a "Wii Wheel," essentially steering wheel shell that you slide the Wii Remote into, and drive by turning the wheel in your hands.

So I'd recommend the Wii to non-gamers looking to get into gaming. There's the handheld option, too. The Nintendo DS offers some very non-gamer oriented games, like CrossworDS, which my wife loves, Nintendogs, which is beyond charming, and Tetris DS, which everyone knows how to play instinctively. If you like puzzles, you'll probably get a kick out of Professor Layton and the Curious Village. So there are plenty of options out there for the non-gamer!

Posts like this just about rekindle my desire to obtain a Wii.

Non-gamer here. I bought my girlfriend a Wii yesterday, and Resident Evil: The Umbrella Chronicles. Wii Sports looks interesting, and Resident Evil looks like the very definition of a game that only a gamer could get any enjoyment out of. :P

Katamari Damacy on the PS2 is kind of fun, and the fact that the gameplay only uses the joysticks makes it easier for people without the coordination to handle games with buttons.