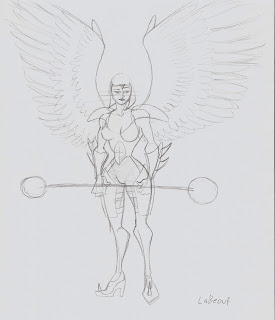 I got my third IV out on the 1st, started back on my normal med routine, and BAM, two weeks later and I'm already developing symptoms associated with another lung infection. I'm going into the doctor tomorrow. Hopefully it'll be nothing but a cold, but I just never know anymore. Follow me on Twitter (@zmiller1902) for updates.

But now is not the time for worry--now is the time for showing off horrible sketches! I'm again working on my "Life on Leather Wings" story. I've got a lot of the storyline worked out and the three main characters well-defined. This is a prelim sketch of one of them--Angol Fear (name taken shamelessly from the Soul Calibur IV character), one of Heaven's Vanguard. She and her squad of Angels is in charge of hunting and killing soul-harvesting Succubi. She is young and brash, but determined and gets the job done. She and Lily have a tenuous truce: Angol won't go after Lily as long as Lily continues harvesting souls that are already Inferno-bound. But the second Lily goes over that line, Angol's coming after her.

I'm having a difficult time imagining the armor for Heaven's Vanguard and Angol in particular. I want it to be imposing but breathable. I don't want Angol to have a helmet, either. But her silhouette is different from Lily (or Gwendolyn): Angol's widest point is just below hips, at the top of her thighs. She has short blonde hair and, of course, those big Angel wings. This is the only drawing I've done in the last month that I've considered good enough to keep, but I'm glad I'm getting back in the groove, slow though it may be.

Ignore the "LeBouf" scribble. I forgot to erase it, and I was trying to figure out if The Beef's name really meant "the beef." Turns out it doesn't--what a shame!

Now then. To lunch!