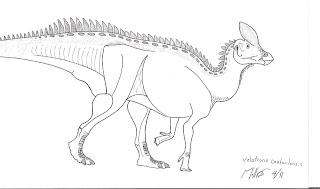 My wife didn't make a color copy of this, but here it is! I draw this for a friend. It was between Velafrons and Coahuiluaceratops and the decision was made by asking her whether she liked Duckie or Sara more in "Land Before Time." I'm also starting a new paleo-artist internet meme:

"No Greg Paul skeletals were referenced for the production of this illustration."

Also, I had the I.V. taken out today. Only two weeks! I'm back to full power. I'll post a picture of my mangled arm later. It's actually not mangled at all. There's a large scab over the hole in my arm and that's about it. Whatever. Velafrons!
Posted by Zach at 7:00 PM

Nice Hadrosaur. Can I perhaps request it be submitted to the Hadro gallery on AE at the end of the month ;)

While I love the idea behind you meme, I personally am going the excate opposite route on that issue.

I am personally making sure I always reference Gregory Paul somewhere in my process, as contray to his insane rants I already paid the bastard for use of his skeletals! Correct me if I'm wrong but didn't I pay GSP when I bought his books! If he didn't want me to have them or use them, he shouldn't have SOLD them to me in the first place!

The only reason I bought the Princeton Field Guide was for the pretty pictures (and those only to spec rough proportion). Everytime I make the mistake of reading the text I get kind of enraged (oh did you know all Lambeosaurines are actually Hypacrosaurus?!? Yeah most people missed that gem as it is in the back, and would have given up due to the Centrosaur crap right before it!!!)

So not that I don't follow your logic here Zach on the meme, but sadly I won't be following your lead. If anything I'm going to be this meme's running nemesis!

Nothing personal against you of course.

Hey Zach, check out my newest post on my blog. It's got a hilarious logo to go along with your new meme, which I will probably join in (and unlike Greg Paul's stuff, my meme logo is freely available for ANYONE to use).