It's the first Boneyard of 2011, kids. Let's make it a GOOD one. I'm honored to once again host this most esteemed paleoblog carnival, which has been taken up by everyone's favorite chasmosaurine lover, David Orr. In fact, let's start things off over at his humble blog: Our man has an interview with the originator of the Boneyard, published author, and dear colleague, Brian Switek! Dave also has a particular fascination (as do I) with old or interesting dinosaur art: Check it out and thank him later. Perhaps best of all, though, Dave's recently been featured as a guest blogger on Scientific American's website. The topic? How to name a dinosaur.

Albertonykus, of the Raptormaniacs blog, has put together an entertaining series of comics called A Christmas Caudipteryx. Makes me wish I was still drawing comics...keep it up, man! You've got the skillz.

Tony Martin, of The Great Cretaceous Walk blog brings us the answer to a question not many of us ask ourselves, but is probably important in the long run: Why Dinosaurs Matter. It's a great post, and it's good to get an ichnologist's point of view.

Remember Traumador the Tyrannosaur? Looks like he's taking a new direction for the new year. Oh, don't change, Traumador! We love you as you are! For more on the changes, check out Craig Dylke's blog for more information. 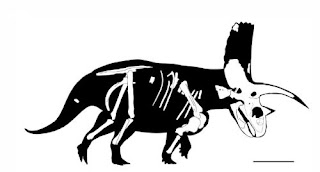 The big news this week has been Titanoceratops, a still unpublished "new" ceratopsid that might actually be Pentaceratops. Lots of people have been covering this, including myself, Dave, and Brian. Andrew Farke has voiced some concerns over this rather of electronically-named dinosaurs, a concern Bill Parker shares.

Have you been watching, over on Archosaur Musings, as Tyrrell's Darren Tanke takes us through the preparation of a Gorgosaurus skull and skeleton? It's fascinating stuff, and it goes quicker than I thought. Dave has also been making a good habit of posting excellent photos of pterosaur fossils. Among my favorites: Scaphognathus and Pterodactylus. 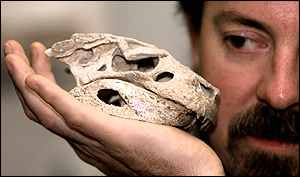 Over at Superceras, David Tana discusses the recent description of the incredible strange but cool Simosuchus and weighs in on the irritations surrounding the buzzterm "living fossil." I'm shocked this little croc isn't getting more blogosphere coverage. You're all aware of it, right? It's like nothing you've ever seen, seriously.

Over at History of Geology, David Bressan (too many Davids in this Boneyard) discusses the ichnofacies of the Bletterbach section. Like me, you may be wondering what the eff the "Bletterbach" section is. Well, I learned by clicking that link. I highly recommend you do, as well!

Head over to the relatively new home of Laelaps to get the skinny on giant goddamn storks and my favorite marsupial carnivore, Thylacosmilus. In a similar vein to the stork story, Ed Yong introduces us to Xenicibis, a bird that could have knocked you out...with its club-shaped hand.

Darren Naish regails us with tales of recent stegosaur controversies in an epic two-part post. More to come, I'm sure. At least...I hope! Stegosaurs don't get nearly enough coverage in the blogosphere or in the literature. Like David, Darren also got some time on the Scientific American blog, touting the virtues of Iguanadon taxonomy. Check out the three part series here, here, and here. Really great stuff! On a related note (sort of), if you've ever wanted to see the holotype of "Ultrosauros," your dreams can now come true thanks to SV-POW!

Head over to the Dinosaur Toy Blog to ogle with delight at Favorite Co. desktop model of Triceratops--I must have it! They also review a Bullyland version of one my favorite sauropods, Spinophorosaurus. Too bad it's such a horrible sculpt!

On the Art Evolved side of things, look for the new Elephants gallery coming soon. Craig's got a preview up at his website, and the always reliable Peter Bond is showing off his work, too. Did you know I'M a member of Art Evolved too? I know, I was just as surprised as you are. I can't help but feel bad that I don't contribute more. Ah, life, you always manage to get in the damn way.

That's it for now. I'll have my own post up tomorrow. It's late and I'm beat. Thanks to everyone who submitted, and thanks to David Orr for helping me out with this edition. Happy reading, everyone!
Posted by Zach at 9:19 PM

Great job, Zach! Forget productivity, people. Indulge in this creamy melange until youur eyes dry out and you fall into an ecstatic slumber.

Or something along those lines.

Yet another successful Boneyard! Here's to many more great blog posts and blog carnivals in 2011!

Thanks for hosting and all the links, Zach! An excellent collection. Just one little note - "Simosaurus" should be _Simosuchus_. David beat me to the punch with his post, but I'll have something about it, "boar croc" et al., and marine crocs coming soon. Just have to pull it all together.

Thanks for an excellent Boneyard, Zach, and thanks Brian for catching the lizard-croc correction. Happy New year, all!