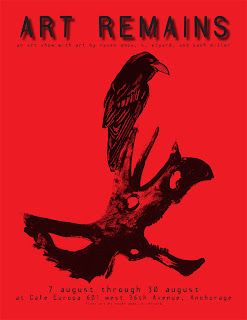 Hey, Alaska, check out the newest art show at Cafe Europa! It'll be there through August 30th. Scott and I spent the night there on First Friday and nobody came, which was disappointing, but hopefully things will improve as the month goes by. For all you none-Alaskan readers, here are some pictures from the show! 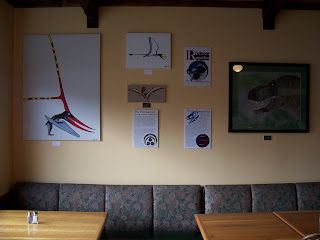 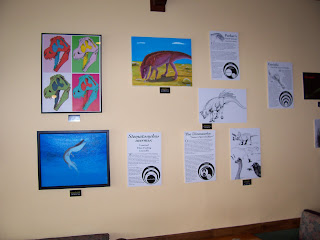 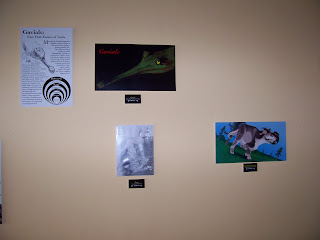 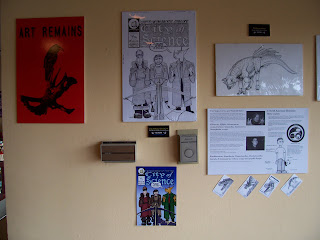 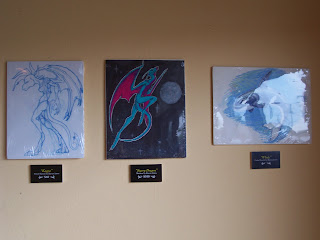 From left to right: An anime dragon character, a dragon, and an orca (Amos). 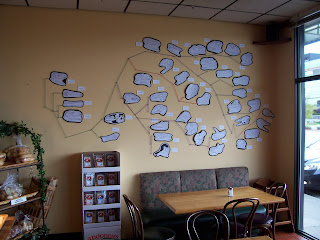 My big contribution: a phylogenetic "roadmap" of the Dinosauria and its immediate outgroups. The skulls turned out great, but the yarn tree didn't. I originally wanted to do a bracket tree, but there wasn't enough wallspace. Scott later suggested a "Y" tree with diagonal lines going up toward a line of skulls, and I'm smacking myself for not thinking of that. This turned out poorly because so many strings imply direct descent. Oh well, a lesson learned for next time. 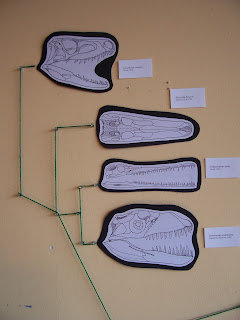 The extremely simplified relationships of the Crurotarsi. I expect Nick Gardner to straight up kill me next time he sees me. Next show, I promise, I'll give the group its due. 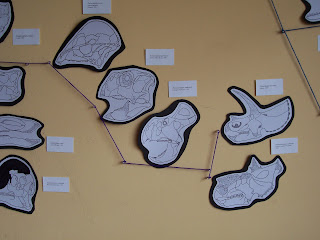 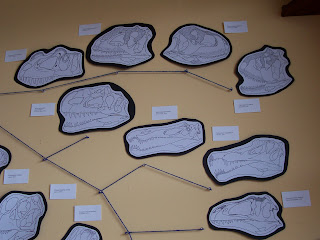 Some of the theropods. Some of these skulls were really fun to draw, like the abelisaurs and Monolophosaurus. 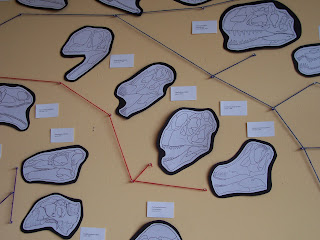 Now I'm gonna have Wedel coming after me. The Sauropoda is reduced to just four genera. Notice Plateosaurus' snout there on the left. 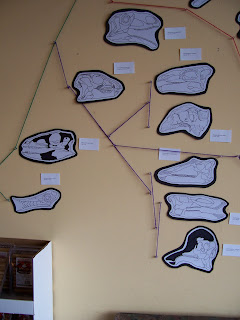 The base of the Ornithodira and the rest of the Ornithischia. Black bones represent unknown elements. See Rhamphorhynchus down there? He was my favorite skull to restore. Notice also that I chose Amurosaurus to represent the lambeosaurines: an animal whose crest is actually unknown. Good pick, Zach.

Lessons for next time: Measure out the yarn beforehand and make a scale model with the available wallspace; include a lot more genera, including crurotarsians, and; add some basal birds. It didn't go straight from Archaeopteryx to Columba.
Posted by Zach at 5:01 PM

Surprised by the lack of Iguanodon. The only complaint I'd make about the croc portion is that it seems to portray the relationships in a polytomy of thalattosuchians, Isisfordia and ornithodirans... probably could have used another little stem off there to make it clear.

Cool idea though, neat to see it up on a wall.

Speaking of which, I thought this was pretty cool-
http://www.youtube.com/watch?v=rZc9rjKo8DU

You might want to turn the sound off before watching though...

The goal was to use genera unfamiliar to people. It's not all Tyrannosaurus, Triceratops, and Stegosaurus (although the latter two did make the cut). Iguanadon was just replaced by Ouranosaurus. Ornithopoda is definately an area I want to bulk up in the future. Ankylosauria, too, and the non-ceratopsian marginocephalians.

I also want to figure out a way to show "uncertain affinities." I want to put Herrerasaurus in, but then attach it to like three different places.