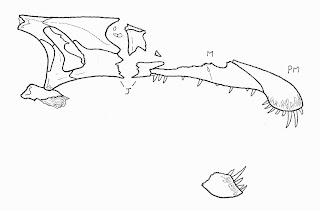 A note to the readers: this post deals with the "Alt-Permian" project that Will Baird and I have been working on for a few years. Perhaps you'll recall the Barbouronopsid and Neo-Dicynodonts from not too long ago. As a result, Xenosuchus prognathus is, sadly, not a real animal. But Will and I are having some fun with it.

Xenosuchus prognathus is a medium-sized crocodile-like archosaur from the Late Xenopermian of Ural region of Russia. It is thought to have occupied a freshwater niche that has not been filled by the giant marine hovasaurs. While its postcranial remains--what few there are--are largely uninformative, the excellent preservation of the skull bones allow much insight into the lifestyle and phylogenetic affinities of Xenosuchus. Its most remarkable feature is the fan-shaped expansion of the premaxilla in dorsal view. 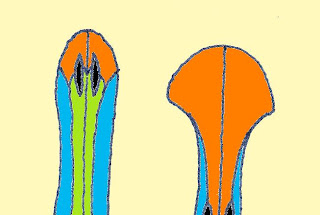 The rostrums of Proterosuchus (left) and Xenosuchus (right). Not the fan-shaped expanion of the premaxilla, as well as the elongation of those bones toward greatly retracted external nares, in the latter.

The smooth dorsal and ventral borders of a small antorbital fenestrae, probably triangular in shape, are preserved on the partial lacrimal and jugal bones. More interesting is the very small maxillary fenestrae which appears just caudoventrally to the external nares. Its smooth margins suggest that the fenestra is not an artifact of preservation, but whether it is the result of bone reabsorbtion or pathology is unknown at this time.

The orbit is small and divided into two parts by the intrusion of the postorbital, bringing to mind such an occurance in many rauisuchian-grade crurotarsians. The upper half is roughly D-shaped while the lower half is triangular. Bits and pieces of the sclerotic ring are preserved in the upper half of the orbit. The frontals are small but form a significant portion of the orbit's dorsal border. The postorbital is a large, plate-like bone that is one of the largest bones of the skull. It is matched in size by the jugal, which has a large ascending process that forms a significant portion of the temporal fenestra's cranial margin.

Most interestingly, the parietal bar is strongly reduced to a nub-like process while the squamosal bones are elongate and curve gently outward in dorsal view. The parietal does not articulate distally with the squamosals, and the skull's back half resembles a "W" in dorsal aspect. The temporal fenestrae are vertically elongate, bordered by the jugal, postorbital, squamosal, and quadrate. The posterior half of the articular is poorly preserved, but reveals a short postarticular process, indicating weak jaw-closing power. 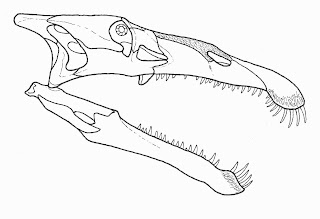 A reconstruction of the skull of Xenosuchus prognathus. Rugose nasals restored on the basis of small rugose bone fragments found near the dorsal margin of the skull.

Though a basal member of the group, Xenosuchus is most assuredly an archosaur based on its socketed teeth and antorbital fenestrae. It most closely resembles Proterosuchus fergusi, another semi-aquatic form with a unique "hooked" premaxilla. The two genera are of comparible sizes as well: both are between two and three meters long.
Posted by Zach at 1:40 PM

Now this is what I call science fiction. This is very convincing stuff -- I'm particularly impressed by your illustration.