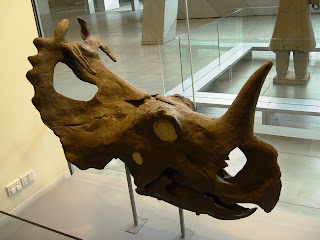 The ceratopsid nasal horn is comprised of towering, fused nasal bones. In chasmosaurines, a small epinasal bone sits atop the nasals until it is incorporated into the bony structure of the horn. The epinasal is most obvious in certain juvenile and subadult Triceratops specimens. Unlike the postorbitals, nasal horns may not be primitive for Ceratopsidae—Zuniceratops lacks any kind of nasal horn, and the plasticity of the nasal structure in both ceratopsid subgroups suggests that they formed independently in both groups. We’ll talk about chasmosaurine nasal horns first, as they are the most standardized and vanilla.

Chasmosaurine nasal horns are never all that tall, and while they appear early in life, the horn itself does not become truly noticeable until late in life. Certainly the suggestion of a horn is there in subadult animals—in fact, it forms a noticeable “step up” from the rostrum to the forehead (see growth series below). However, aside from the small epinasal, a true horn does not develop until the chasmosaurine reaches maturity. In almost all genera, the horn is angled anteriodorally, forming a “ski slope” toward the rostrum. Once chasmosaurines reach maturity, the nasal horn continues to thicken and elongate—in old adult Triceratops specimens, the horn points subhorizontally. Some chasmosaurines, such as Torosaurus, place less emphasis on the nasal horn, seemingly content with developing a narrow, almost rounded horn. Agujaceratops follows a similar pattern. Even as its postorbital horns rise ever higher, the nasal horn remains short and rounded, though definitely more distinct than in Torosaurus.

Nedoceratops (= Diceratops, Diceratus) apparently has no nasal horn, but a close inspection of the type (and only) skull reveals that in fact it has a very small one. Lacking an epinasal, the stepped structure of the horn may suggest that the individual is simply a subadult who has not developed its nasal horn yet. On the other hand, it may also be related to Torosaurus (as a recent phylogeny suggests), which itself has an abbreviated nasal horn. Much has been made of Arrhinoceratops’ alleged lack of nasal horn (thus its name), but rest assured that a nasal horn is present, just partially broken off. In fact, its nasal horn may have been quite impressive.

Centrosaurine nasal horns are divided basically into two types: horns and bosses. A small banana-shaped boss is present on Albertaceratops, and two veeery small horns are present on an undescribed taxon from Utah (seems they could easily be sections of a broken boss). Horns are generally more prevalent than bosses among centrosaurines, though they come in some weird shapes. Centrosaurus (= Monoclonius) has a large, singular horn which curves every which way in different individuals. As you can imagine, early American fossil hunters gave different genus/species names based on different horn shapes. The result is that Centrosaurus has perhaps the most complex taxonomic history of all ceratopsids (except maybe Triceratops). Most skulls assigned to Monoclonius have been sunk into Centrosaurus, or have been unassignable to specific genera given what we now know of ceratopsid ontogeny. Styracosaurus albertensis was once restored with a towering nasal horn, but a reappraisal of the genus by Michael Ryan showed that this is wrong—Styracosaurus actually had a mid-sized nasal horn that may not have been all that pointy. 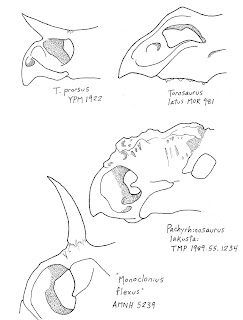 The king of nasal bosses, however, is Pachyrhinosaurus, the largest of the centrosaurines and the most northerly: the taxon is known from the North Slope of Alaska. There are currently two recognized species: P. candensis and P. lakustai, both from Canada, but occur in different stratigraphic layers. Both show remarkable facial reconstruction with age. P. lakustai is the better-known animal, and a monograph was recently published on it. An ontogenetic series demonstrates the bizarre nature of the boss: babies and juveniles have respectable nasal horns and short postorbital bumps. As they grow, the nasal horns do not grow upwards, but laterally, eventually spilling over the lateral edges of the nasal bones (see illustration below)! In P. canadensis, the nasal and postorbital bosses eventually grow together to form a gigantic bony mass, but in P. lakustai, they all remain separate structures. In some individuals, the ballooning nasal boss begins to reabsorb and becomes concave.

Last time, I lamented how postorbital horns are not good phylogenetic markers, but nasal horns may be. All members of the Chasmosaurinae have basically the same nasal horn structure with different sizes and shapes depending largely on ontogenesis. The horn is almost always ski-sloped, fairly short, and sometimes rounded or blunt. The nasal horn often “steps up” the skull from the rostrum. The most impressive nasal horn among chasmosaurines may belong to Triceratops itself. Even its closest relatives (Torosaurus and Nedoceratops) have pitiful nasal horns by comparison. Even so, chasmosaurine nasal horns seem to have common features, and nasal horn morphology could be useful in establishing at least whether a ceratopsid is a chasmosaurine or not. As for centrosaurines, nasal horn morphology is strikingly different from chasmosaurines. The nasal horn is expressed just as often as a boss! When a horn is present, it grows vertically rather than angling forward, and it often dominates the face. In pachyrhinosaurs, a short nasal horn is present in juvenile animals but quickly becomes a boss in subadults. However, these bosses are very distinct from the small, smooth banana-shaped boss in Albertaceratops. 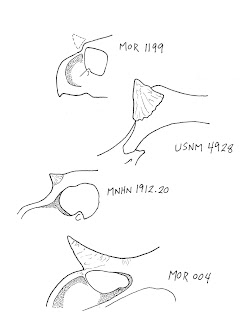 Horn growth in chasmosaurines, as exemplified by Triceratops. Note the "stepped-up" look of the rostrum in everyone except MOR 004.

How did ceratopsids use their nasal horns? In addition to figuring out that Triceratops used its postorbital horns for intraspecific combat, Andrew Farke also discovered that Centrosaurus must not have fought the same way, as the frills he studied carried virtually no scars attributable to intraspecific battle. This is not so surprising—without large postorbital horns, it’s difficult to see who centrosaurines head-to-head in quite the same manner, but it would appear that even the elongate nasal horn did not inflict injury on conspecifics. Absent any pathological evidence, it becomes very difficult to figure out what the nasal horns were used for. In chasmosaurines, they may have simply served as age indicators—Horner & Goodwin demonstrated that nasal horn morphology changes significantly along with postorbital morphology during growth in Triceratops. Like the angle and curve of the postorbitals, chasmosaurines may have looked to the development of the nasal horn to assess age and fitness amongst themselves. But what of centrosaurines, who exhibit a far greater range in nasal horn morphology?

Sexual dimorphism is often invoked. In fact, it’s been suggested that Centrosaurus apertus is simply the female of Styracosaurus albertensis—an idea that has largely been ignored. Sampson discussed the possibility that Einiosaurus and Achelousaurus were sexual dimorphs of the same species, but decided that without a large, mono-specific sample size (like a river crossing bonebed), there was just no way to be sure. Indeed, sample size is the biggest roadblock to determining sexual dimorphism among any extinct organism. Sexual dimorphism has been shown in Protoceratops andrewski only because its bones are littered across the Mongolian desert, and sample size is not a problem. When you only have a few partial skulls or skeletons, though, demonstrating sexual dimorphism becomes much more difficult if not impossible. Even where monospecific bonebeds are known, as in Pachyrhinosaurus lakustai, sexual dimorphism could be confused with ontogenesis. Is this individual a female, or just a subadult male? Or a subadult female? There is often no way to know for sure.

Horned centrosaurines may have used their horns as part of the overall display, and perhaps they lacked any kind of practical purpose aside from perhaps defense. Like the giant postorbitals of Triceratops, I can’t see Styracosaurus turning its horn away from a charging tyrannosaur. One wonders, however, about the bone strength of such horns. Could a predator be impaled without risk of injury to the horn itself? A recently-described Triceratops horn shows evidence of having been bitten off by a tyrannosaur! Pachyrhinosaurs, with its broad, horn-covered boss, would have been better protected against attack, as head-ramming would be a more viable alternative to impaling from both an injury prevention and practical standpoint. The bosses may also have been used in intraspecific combat—shoving matches or aggressive charges are well within the realm of possibility. It would be really cool if some pachyrhinosaur skeletons showed broken and/or healed ribs, which you’d think would be caused by intraspecific combat. Unfortunately, there are no postcranial details in the P. lakustai monograph, but hopefully somebody can investigate that in the future!

Hey Zach, this is probably the best intro to nose horns I've ever come across! I've always been fascinated about Centrosaurine horns in particular, including the theory of an Styracosaurus - Einiosaurus - Achelousaurus - Pachyrhinosaurus evolution line.

Another good tidbit is the part about how Chasmosaurs used nasal horns as indicators of age and perhaps other things. I also have a hunch that as a ceratopsian grew older, the horns and spikes not only grew longer, but also the little studs and bosses on various parts of the frill became more pronounced.

With an old male Pachyrhinosaurus I imagine this would produce a downright terrifying "warty" appearance. Its face was literally a tank.

This has been an excellent set of ceratopsian posts thus far and I look forward to future installments. The animals are probably my favorite dinosaurs as well...it's good to know that you've seen the light as well! :)

lol they could bash just about anything and get away with it.