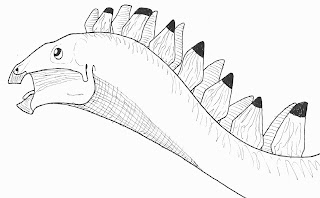 You all remember Brachytrachelopan, right? 'Twas the dicraeosaurid sauropod who tried to be a stegosaur? Well, today a new stegosauropod was published, but this time it's the opposite situation: a stegosaur trying to pose as a sauropod! Miragaia longicollum is known from pretty much front half of the skeleton, most of the pelvis, and bits of the skull. It is from Portugal, and joins Dacentrurus as the continent's best-known stegosaurs. In fact, the two animals share enough features that they are united in a monophyletic Dacentrurinae, which itself forms a sister group to Stegosaurus itself. But what really makes Miragaia awesome is that it has 17 cervical vertebrae.

Most sauropods have been 12 and 15 cervicals. Sauropods, people.

However, Miragaia is not an enormous stegosaur--it is smaller than Stegosaurus, and would have outdone its cousin's upward reach by only a little, so niche partitioning alone doesn't really explain Miragaia's long neck. Instead, the authors suggest that, like the modern giraffe and some sauropod dinosaurs (maybe), Miragaia's long neck may have been a sexual selection character. I guess all the plates and spikes just weren't doing the trick!

Perhaps best of all, the paper is available to all takers (for now). Get it while the gittin's good! Also, I apologize for the hideous drawing above. I spent no time on it.

Mateus, O., Maidment, S.C.R., and N.A. Christiansen. (2009). A new long-necked ‘sauropod-mimic’ stegosaur and the evolution of the plated dinosaurs. Proceedings of the Royal Society B: first online

"Miragaia's long neck may have been a sexual selection character. I guess all the plates and spikes just weren't doing the trick!"

I think that's as likely as anything, but do note: a longer neck means more plates!

Hi Zachary, this stegosauropod is very sweet. The plates are nicely placed. The characters look sweet when they have longer necks. I don’t know why I have fascination for longer necks and that’s why I liked it most.