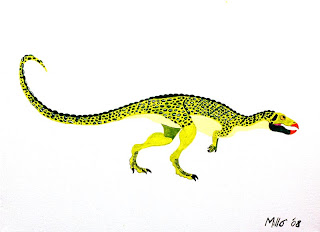 From a distance, you would think that Effigia was a small dinosaur. In fact, although its family is from the Late Triassic, previously-named relatives have been considered to be very early representatives of the ostrich-mimic dinosaurs! It wasn't until Effigia was described in 2006 that the true nature of the family became clear. These were poposaurs, a group more closely allied to animals like Arizonasaurus than to dinosaurs. Aside from its crocodilian ankle structure and vertebrae, though, Effigia was just as "dinosaurian" (if not more so) than the theropods that shared its habitat. Aside from being fully bipedal, Effigia had a toothless beak, booted pubis, long, flexible neck, and lacked any kind of bony armor. What's more, Effigia's family may have predated the rise of dinosaurs. This suggests that dinosaurs may have been Effigia-mimics rather than the reverse.
Effigia and its cousins are wonderful examples of convergence, where two unrelated animals develop the same adaptations and look superficially similar. More familiar examples might be the resemblence betwee dolphins and ichthyosaurs, ore saber-toothed cats and saber-toothed marsupial predators. In all examples, similar body types evolved multiple times in wildly disparate synapsid groups, from pre-mammalian pelycosaurs and gorgonopsids to herbivorous brontotheres, machairodont cats, and even a few extinct and living deer!
Artist Notes
I hate this picture. I hate it so much. This was the last picture I tackled, and honestly, I was done with the show. The colors are terrible. Have you ever seen a neon-green crocodilian? Neither have I. The belly is too light, and I'm not sure what the f*ck I was doing with the eyeball. Then I gave it an orange beak. I was clearly under the influence of some covert drug. I actually knew after getting the "bottom layer" (neon green) down that it was a mistake, so I spent the rest of the time trying to cover it up with dark green scales. Didn't work, and this is probably the one piece I will burn when the show comes down in two days. Besides the cramp-inducing color scheme, the neck could use some of those tail vertebrae. In general, the proportions are alright, but the neck is too short and the tail's too long.
Fun Facts
Effigia is one of the only taxa to survive multiple reworkings of the taxa list for the show. It's my favorite example of convergence because, in some ways, it's more dinosaurian than the dinosaurs it shared its habitat with. My intention the whole time was to make its body outline look like an early dinosaur, but keep some of the traits that make it a crurotarsian, namely large scutes 'n' scales. There's a loss of osteoderms in Effigia, but that doesn't mean its skin was completely naked. Crocs have plenty of non-bony scutes, so why not Effigia?
In closing, I really hate this picture. As Darwin as my witness, I swear to you, the Cetacea show will be far superior.

I think my venn diagram just looks stupid here. There's nothing here that can't be just as well said in the text.

It's time to retire these.

if you don't want it, i'll totally take it off your hands. i enjoy it!

Then redo the picture. Strip off everything you got wrong and do over in the way you prefer. You don't it's gonna bug you and make you vote big L libertarian when you turn old and nasty.