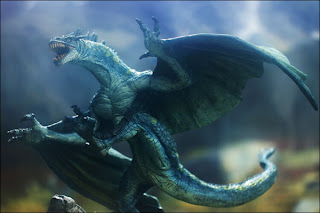 Known in South Africa for years as the "caped dragon," Nielson provided the first description of Eowyvern dorsetti in 1929. Given that so few wyverns were known at the time (only Fugaxotitan and Gracilopterus predate it in the literature), Nielson was at first unsure of how to categorize the creature. At a mere six feet long, Eowyvern is slightly larger than Gracilopterus but much heavier, and completely flightless. Its build it far more dinosaurian than wyvernian given its functionally tridactyl pes, reduced hallux, facultatively bipedal (and horizontal) posture. Nielson even considered a connection with Aves, suggesting that Eowyvern was, perhaps, an ancestral relic of birds, surviving to the present. Perhaps not surprisingly, this possibility was briefly revived and endorsed by Feduccia in 1996. However, Nielson eventually placed Eowyvern at the base of the Wyvernia, a location it has not moved from since. Although some workers believe that Eowyvern represents a more modern wyvern which has become secondarily flightless, the current concensus is that it represents an incredibly basal lineage.

The most obviously basal feature of the animal are its wings. More like a pterosaur than a wyvern, Eowyvern's patagium is attached to a single extended digit IV, and the patagium extends down to the end of the ribcage on the body. The wing is incredibly small and has no flight capabilities. Digits II and III are long and move more or less as a single unit. Digit I is opposable. The arms themselves are not particularly long, and a propagagium extends from the wrist to the shoulder, strengthened by a thick tendon. Eowyvern is surprisingly broad-chested, unlike the deep-chested flighted wyverns, and long-bodied. The legs are powerful and tridactyl, making Eowyvern the most cursorial of all wyverns (or dragons). The skull is fairly small given the animal's overall size, and is equipped with numerous dagger-like teeth. The snout is blunt and subrectangular, more like dragons than wyverns. The eyes posess a fair degree of binocular vision. Eowyvern has a stout, powerfully-muscled neck.

The creature is undeniably predatory, often chasing down medium-sized mammalian herbivores such as boars and young or sick antelope. Eowyvern has been known to share territory with Tauropesa ungulatus, although Brimely (1953) noted that, given the latter's larger size and more aggressive attitude, Eowyvern always backs down from a direct confrontation. Eowyvern attacks prey with its hands extended, grabbing prey and tearing away a chunk of meat with its teeth before letting go. The target often dies of shock and bloodloss within a short time. The wyvern is not above scavenging carcasses, either.

Switek (1978) was lucky enough to observe several instances of wing use in Eowyvern. These observations are very powerful, in that they may allow draconologists to study how the wing structure evolved in more derived wyverns. In one instance, a large male Eowyvern had extended its wings, which had become brightly colored, to a female who he was courting. The male stood fully upright, or at least as upright as it could get, and "shivered" its wings in an attempt to show off the bright breeding stripes which had lit up the patagium's underside. The normal-colored female seemed unimpressed, and eventually ran away. In another instance, Switek watched as a female shaded her brood with her wings. The hatchling wyverns were small but looked much like their mother aside from larger relative eyes and proportionately longer hind limbs. However, at no time did Switek observe a wyvern flapping its wings or making use of the wings in any way that would suggest a precursor for flight. Switek reasoned that perhaps over the millenia, Eowyvern, in finding no use for flight-related activities, had lost such behaviors entirely, and that its own uses for its wings had developed apart arboreal needs. Switek's paper is interesting in that he only discusses Eowyvern for about two-thirds of the paper, and spends the last third complaining about the his institution (wink!).

Eowyvern continues to be a point of fascination today. In an upcoming publication on wyvern genetics, Milnar & Fries hope to accurately pinpoint the "first wyvern" on an extent family tree.

You could definitely say that I'm a dragon expert if I was studying them before I was even born, heh.

Thanks for the reference, Zach!