The Skull that Zach Built 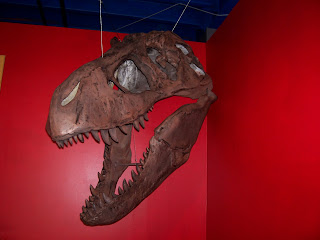 Well, along with Scott, Brian, Raven and two of Raven's friends (whose names escape me now). I've kept this under wraps on the blog because of my distain for the structure now, but over the past year, we Alaskan paleoarists have been cleaning up and refurbishing a Tyrannosaurus rex skull cast, which the Alaska Museum of Natural History recieved from Treasures of the Earth. The thing was shoddily crafted with extremely thin walls (which cracked quite often) and an enormous "lip" along the maxillary teeth due to a mold misalignment.
And then, of course, there was the foam. We shall not go into the Trials of the Foam at this time, because doing so results in nothing but weeping and heavy drinking.
When we finished rebuilding and painting it, the skull was taken from us and an armature system was created. Months passed without word on its progress. Hope was lost, as was our collective interest. Scott called the museum on a whim one day and they told him that the skull was up and attractive visitors (thanks for calling us, guys!). I went down there today to see it and take back MY skull replicas.
Thankfully, it turned out pretty well! 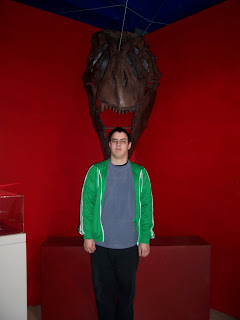 Hey! We want a guided tour with you and Scott. Maybe we could organize something through SSA?

And - not that there's anything wrong with what you posted - but I'll bring my camera and take some better pictures for your blog/wall/birdcage liner....

A guided tour would be excellent. (As soon as I finish moving into Anchorage!)

I didn't think we were really done with it though.....no bondo spots on it, is there?

The other two were Nick Casler and Dennis Denniston....were they included on the list of indentured servants?

What? WHAT? You assume there's some kind of LIST, or perhaps SIGN, telling the world who slaved away in the pits of Tartarus on this bloody, broken excuse for a tyrannosaur skull, so that our endeavors would not be in vain.

BUT NO. There exists only the single skull, hanging from the ceiling, with no identifying markers of any kind.

I'm afraid you ask too much!

Nice!! Well done, sir!! I am proud of your hard work AND heavy drinking!!