A lot of you responded strongly to this post, in which I chided the media for demanding a full restoration of an animal known only from a hand and part of a foot. That beast was Hagryphus, and I asked my readers their opinions on restoring animals from scrappy remains. Mike Skrepnick and I had a chat about it over the email, too. I'm going to copy and past that conversation here, interspliced with some beautiful pictures that Mike graciously let me post here, possibly for the first time. 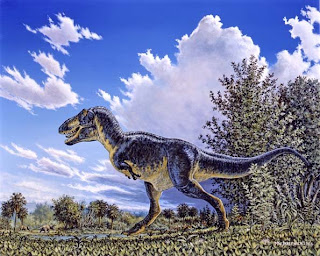 Zach (me): What do you think of restoring an animal from less-than-spectacular remains? Not just Hagryphus, but even a beastie like Masiakosaurus, who is known from otherwise pretty good remains, but the entire skull is missing?

Mike: In terms of "reconstructing dinosaurs based on scrappy material", I think its a "double edged sword" of sorts. . . ( a lot of the following, I'm sure you're familiar with, but is essentially my perspective on the subject, and observations on paleo art in general )

ON ONE HAND, it can call for an inordinate amount of speculation on the part of the artist, as you are implying anatomical features ( in a worst case scenario based solely on speculation / fantasy ), rather than at the very least an "inferred" look ( in cases where some elements are diagnostic and can point you in some general direction, Hagryphus being a case in point ). If you consider the problem of extinct vertebrate reconstruction from a more universal, objective perspective, it is clear that even in relatively well known taxa, a fleshed out reconstruction is still very open ended, in terms of soft tissue anatomy, integument, coloration, etc. . .

- evidence for dewlaps, skin folds, etc. . . as in hadrosaurids, where some of the mummified remains can be very suggestive, although not representative of all members of a clade

- specimens in which scalation / tubercles / dermal armor - ossicles / scutes, etc. . . are preserved as fossil elements / impressions, even revealing patterns of organization (ceratopsian rosettes, flank and underbelly linear arrangements in some lambeosaurines, etc. . . ), but often only in small areas of skin preservation. To date, I think the Brachylophosaurus "Leonardo" has the best overall "map" of differentiation observed in a single, intact body, but in most when left with only small, tantalizing areas of dermal structures, what to do in terms of the rest of the outer appearance ?

- if the proximo / caudal bristle-like "mane", recently discovered in psittacosaurs ( by virtue of one chance discovery ) can give us such a dramatic change in the look of an otherwise, well known genus, what does it imply in terms of our understanding of the actual appearance of dinosaurs in general ?

- not so very long ago, ( 1996 when Phil and I were in Beijing, and the first North Americans to see the now infamous type of Sinosauropteryx with filamentous feathery "halo" preserved intact ), we were witness to a paradigm shift in the science, that has changed the course of vertebrate paleontology in a significant manner. Prior to that, suggestions of the bird - dinosaur relationship posited by Ostrom, Bakker, and Paul, were not nearly as defined, as our understanding is getting to be now ( I remember alot of us looking at Greg's feathered dromaeosaurs with a certain initial skepticism prior to the entry of "Sino" and subsequent feathered theropods, but in hindsight seems pretty certain his intuitive observation was right all along, and has been fully vindicated in his "artistic assertions".

- another leap by an order of magnitude is in coloration ( which we've discussed previously ), modern analogs, being in my opinion the best guide / reference in this respect, but still subject to conjecture. You know the old story " short of a time-machine. . . "

- extrapolating further still, what about postulating on traits and behaviours, environments, ecosystems. . . paleo botanical specimens, references and data are even more dodgy than that encountered in animal remains. I've often experienced far more frustration in attempting to reconstruct plausible environments / placing dinosaurs in context, than in dealing with the dinosaurs themselves.

- if, in only a century we've gone from the "cutting edge" science of Marsh and Cope ( that insisted upon seventy - eighty foot long sauropods largely restricted to life in ponds and lakes to help float their mass, incapable of supporting their weight on dry land ), to current day advances that reveal truely enormous titanosaurs that moved freely about, wide experimentation in small theropod flight mechanisms, alternate metabolic regimes, etc. . . What does the future of paleontology hold in store? How much of what we now understand, will be overturned, reinterpreted, replaced by new information through technological advancement yet to be invented / discovered ? Perhaps at this stage, it will progress in small increments of "fine tuning", but I wonder what dinosaurs will look like by 2108?

ON THE OTHER HAND. . . if we in some cases have only tenuous material to work from and choose as a result of limited data, not to address a "reconstruction" until better specimens come to light. . . how long might we wait ? Paleontology, by virtue of the very nature of the science, calls for a certain amount of "imagination" ( a reason why I think many involved in this pursuit, also have a penchant interest in science fiction, fantasy, etc. . .) It's a sort of "new frontier" science, in reverse.

For now "paleo art" is still in the largest sense "Art". . . a vehicle by which we can try to grapple with extinct worlds in a manner that complements the formal description of specimens within the literature, and is a conduit that makes the hard science accessible to the general public. The point of restoring extinct taxa visually ( whether from a handful of isolated elements or fully articlulated pristine skeletons ) is by a matter of degree, an attempt to hypothesize appearance. . . and however imperfect, it's the best we can do with what we have. In my own musings ( on my better days ), I like to think I'm for the better part "getting it right". . . as an advocate for ancient life whose "voice" is at best, a distant "echo" in the fossil record, the process of interacting with academics and interpreting information through the medium of paint remains an intriguing challenge. 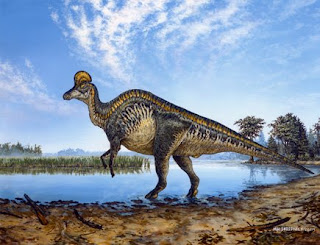 Zach: I agree on all counts. And it really is fascinating that the entire face of the Dinosauria has been turned on its head over the last twenty-five years. It's so exciting, too. But it's also frustrating! We'll never know all there is to know about our favorite saurians. And that really is where paleoartists like you (and to a lesser extent, me) come in. We fill in the gaps as best we can, although there are times where the most tantalizing bits are just out of reach!

Mike: The interesting juxtaposition is. . . that art is inherently a subjective manifestation of the artist, while paleontology requires detached objectivity in analysis of the data. The function of the paleo artist is to attempt to successfully straddle the nether regions between both disciplines, producing a result that will both survive scientific scrutiny and satisfy our natural curiosity. 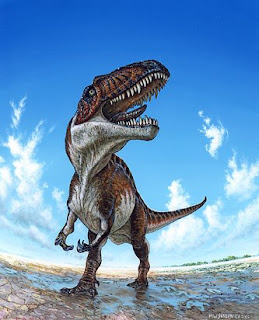 The man has some good points! Paleoart really is about trying to find that balance between objectivity and creativity. And clearly, Mike knows his stuff. Look at these beautiful pieces! For the curious, that's "Black Beauty," a gorgeous Tyrannosaurus on top, Corythosaurus in the middle, and Acrocanthosaurus down here. And hey now, that Corythosaurus is standing in the same spot that a Tyrannosaurus took down a Triceratops on the cover of Dinosaur Imagery! I just noticed that.

Again, dear readers, feel free to make your own points in the comments section! And I may have to blog about how I reconstruct dinosaurs, so you can all give me tips!

P.S. The Corythosaurus landscape is not really the same as T.rex vs. Triceratops. I just thought they looked similar enough to make a passing reference. As Mike pointed out to me, nine million years separate the helmeted lizard from the tyrant and the three-horned face.

Wow cool for let us in on that conversation! Cool to hear how various artists approach the subject.

In line with the on going discussion on Tetra Zoo would be interesting if we were to hear what that guy from taking care of dinos had to say about his terrible dinos.

Zach (me): What do you think of restoring an animal from less-than-spectacular remains? Not just Hagryphus, but even a beastie like Masiakosaurus, who is known from otherwise pretty good remains, but the entire skull is missing?

Please be careful. It's _Masiakasaurus_, not "Masiakosaurus". The entire skull is not missing, there is cranial material preserved. I understand your point, but please be careful to be truthful.

You're right, alkalynic. There is a maxilla, and I did, upon looking back, accidentally press "O" instead of "A." I should really edit these more carefully.
I wasn't trying to falsify the evidence--I just didn't have Masiakasaurus' description right in front of me. I apologize for the omission, but it wasn't intentional.

Quite a bit more than just a maxilla is preserved. :P

Of the skull? Not according to the description I have!

Hey There.
Excellent Post! As a dabbler in paint myself, I feel bound to point out that any reconstruction, or any painting for that matter, is as much a reflection of the artist, the audience, and the civilization at the time when it was made, as it is a representation of something past. That's why Owen's reconstructions look funny to us. In reality it is not merely that Owen's works owe as much to speculation as to science, but also that his interpretation through the lens of his experience was very different than our own.
Art is a human endeavor, and always teaches us about the artist, and about the observer as well as what is observed. That's why it's so darn interesting.
-Bel

the "and" in that post was supposed to be "art". My apologies.
-Bel.

There is more cranial material than just the maxilla preserved.

Yeah, not seeing anything other than "maxilla" as far as skull material, alkalynic. What other skull bones are listed there? Keeping in mind, of course, that individual teeth don't count, and the dentary is not part of the skull.

There is a problem here in the misuse of "skull" and "cranium". I was wrong to refer to "cranial" material in this sense, as I meant "skull", however, you are wrong to reject the mandibles as not being part of the skull. They are in fact part of the skull, but not the cranium. That aside, additional skull material (from both the cranium and the mandibles) has been recovered for _Masiakasaurus_. Refer to Krause et al. in their paper on Late Cretaceous terrestrial vertebrates from Madagascar.

That aside from the link I gave earlier, from the mandibles, there is not only the dentaries, but an angular and a splenial as well. Individual teeth may not count, but what about those that were recovered in situ?

In-situ is great, but...God, look, the point is that a splenial, a questionable angular, and a maxilla are not going to give you a good picture of Masiakasaurus' head. The whole point of my discussion with Mr. Skrepnick was to get his opinion on what he thinks of restoring animals based on scrappy material. Sure, Masiakasuarus' skeleton is pretty well known--great! But with a dentary that wierd, and given that other abelisaurs have freaky heads, I think it's too soon to draw any sort of definitive skull.