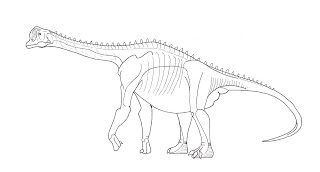 Continuing the trend set by Nigersaurus this last week, I've decided to draw another unusually small sauropod (and I'll do yet another one in a few days!). This here is the ridiculously small Europasaurus holgeri, from the Late Jurassic of Germany. A group of individual animals, spanning an impressive range of sizes, was described in 2006. The smallest animal was 1.75 meters long, while the largest was 6.2 meters. Clearly, a growth series is represented here.

The animal's small size is attributed to insular dwarfism. Remember those mammoths that survived on Russian islands until a few thousand years ago? That's also insular dwarfism. Large animals tend to become dwarves when they're stranded on islands, and the food supply is limited. We know that Europasaurus is a dwarf (and not just a juvenile) thanks to its growth rings. When animals are growing quickly, they lay down rings with long intervals between them. As the animal grows more slowly, or not at all, the rings are deposited very close together. In the largest Europasaurus individual, there were a few far-apart growth lines, and then, near the outer edges of the bone, the growth lines are tightly packed. So not only was the largest individual quite small, it was also fully grown.

The authors argue that Europasaurus drawfed itself by slowing its growth rate by comparison to larger neosauropods like Camarasaurus and Brachiosaurus. Speaking of those macronarians, a cladistic analysis posits Europasaurus fallings between Camarasaurus and Brachiosaurus among macronarians. One wonders what kind of dwarf theropod hunted this little sauropod (if any). Next up: Brachytrachelopan!

Ooh yes, please give us Brachytrachelopan! In all this talk about Nigersaurus, I've been disappointed that no-one's mentioned the other weird rebacchisaurid.