#1. Gabara
Without a doubt the worst monster off all time (not just Godzilla movies) is Gabara, a cheaply-made ogre-like creature from Godzilla's Revenge, which is worse than the last few Showa-era Gamera films. Gabara can make energy rings come out of his palms, or something. I didn't really pay attention. The whole plot of the film is terrible and is just a vehicle to get kids into movie theaters. Some kid in Japan is getting bullied at school and he imagines himself on Monster Island and Minilla is his friend and Minilla speaks perfect English (or Japanese) and there's a bunch of stock footage from Son of Godzilla (also horrible) and Gabara represents the bully...it's all just so very terrible. 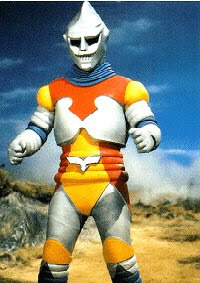 #2. Jet Jaguar
Godzilla vs. Megalon, a late-era Showa entry to the series, has the honor of introducing not just one, but two completely awful monsters into the Godzilla mythos. Jet Jaguar is the one that really really sucks. In the film, in which Godzilla must battle Gigan and...*sigh*...Megalon...a Japanese toy-maker creates Jet Jaguar, an action figure that can, somehow, grow to monsterous proportions. Without Jet Jaguar by his side, Godzilla would surely be defeated by the horrible ring of fire that he and Jet Jaguar are at one point trapped within. No military weapons on Earth can even scratch Godzilla, but a tiny circle of flame? It's his achilles' heel! If Jet Jaguar has any powers (other than being stupid), I've completely forgot them. Oddly, Jet Jaguar's got quite the fanbase in Japan. I can't explain it.

#3. Varan the Unbelievable
What's unbelievable is that this flying squirrel/iguana thing got his own movie (called, predictably, Varan the Unbelievable) before helping Godzilla and Co. help defeat King Ghidorah for the eightieth time in Destroy All Monsters. Varan can glide with his two...you know, membranes. Just like a flying squirrel if, you know, said squirrel weighed 80 tons and was almost 100 feet long. 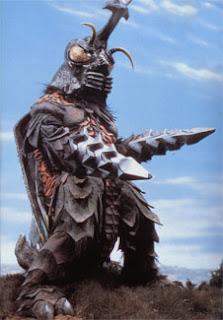 #4. Megalon
I hate Meglon with a passion matched perhaps only by my hatred of Nazis or possibly Neocons. Megalon's costume is actually not as nice as this picture. I get the feeling this is a sculpture of his likeness. Onscreen, the Megalon costume looks like a pair of pants with paper mache fins or "armor" attached to it. The helmet seems to have been made out of a trash can. Megalon can fly at speeds of Mach 3 (I guess), can shoot a lightning beam from his horn, and can burrow through the Earth by clasping his hands together, whereupon the silver sections act in concert like...you guessed it...a drill. Megalon is not an alien but the guardian of Seatopia, an undersea city that has become angry with the ground-dweller's polluting the oceans. So they send Megalon to deal with mankind. Megalon sucks, and so does Godzilla vs. Megalon, which also, incidentaly, features Jet Jaguar. 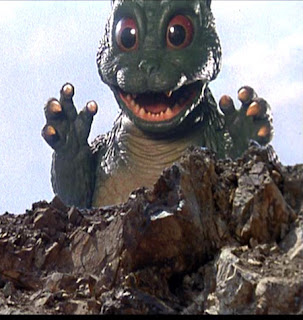 #5. Minilla (in all his forms)
Some people refer to Minilla as "Godzuki." This is actually an error made by the stupid Godzilla cartoon of the 1980's. The "baby Godzilla's" real name is Minilla (or Minya) and he is a bastardization of the King of the Monsters I so love. From his original incarnation in Son of Godzilla to his revision in Godzilla vs. Spacegodzilla to his horribly anthropomorphic turn in Final Wars, Minilla is always there to throw some suck into an otherwise good kaiju film. While the Showa series was awful in its own right, the Spacegodzilla version of Minilla (there called "Little Godzilla") looked like one of the Bubble Bobble dinosaurs, with a head as large as his papa's, and eyes that were actually larger. This is bizarre, because Baby Godzilla, from Godzilla vs. Mechagodzilla II actually looks like what a baby Godzilla would look like, and Godzilla Jr., from Godzilla vs. Destroyah, looks like an immature Godzilla. But the Spacegodzilla version doesn't match up, instead just looking stupid. Minilla is a pox upon the series that refuses to go away. I hate him so much. 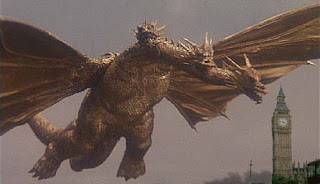 Honorable Mention: King Ghidorah
Supposedly the supreme villain of the Godzilla movies (and the most popular), I actually can't stand Ghidorah. He's got a boring, never changing design (fat body, three Chinese dragon heads, broad wings) and is overused. He was in Godzilla vs. Monster Zero, Godzilla vs. the Astro-Monster, Destroy All Monsters, Godzilla vs. Gigan, Godzilla vs. King Ghidorah, Giant Monsters All-Out Attack, and Final Wars. He's always spitting lightning bolts (sorry, "gravity beams") and chuckling to himself. The Heisei series saw some improvement with Mecha King Ghidorah, but even that seemed kitchy. King Ghidorah has the potential to be pretty bad-ass (Rebirth of Mothra features a much cooler "Death Ghidorah") but overall, King Ghidorah kind of sucks.
Posted by Zach at 11:00 PM

how do you hate king ghidorah hes the awesome monster

'of' and 'off' are different words.

Dude! Megalon was awesome! So was king Ghidora

some were way worse. one looked like an electric knife and flew. (can't remember its name)the smog monster ws kinda lame too. looked like a giant mutant rose bush.